In a bid to stop misinformation around the novel coronavirus and with an attempt to strike a chord with the commoners and erase the lines of fear, the Dhubri police in Assam through its social media platforms have also come forward with various initiatives and are playing an active role in combating frauds via their platforms.

With over ten thousands of followers on Facebook, Dhubri police on Thursday have shared an inspirational message for the common peoples who always ignore the traffic rule posing their life in danger along with other commuters too. 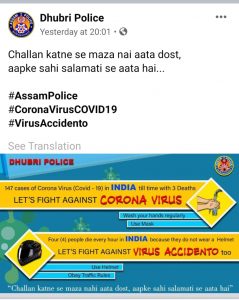 Police on one hand are appealing the people to fight against the deadly coronaviras which has already claimed three lives in India while more than 147 peoples have so far been detected as positive.

On the other hand, the police through their campaign on road safety also want to leave a message to the people to follow the traffic rule on roads and further appealed to wear a helmet.

At least four people die every hour in India because they do not wear a helmet and accordingly it is the need of hour and duty for all of us and thus, “Let’s fight against virus accident too,” the tagline further said.