As per the ACA notification, refund will be made only for two days – Saturday and Sunday and that too from 10 am to 6 pm 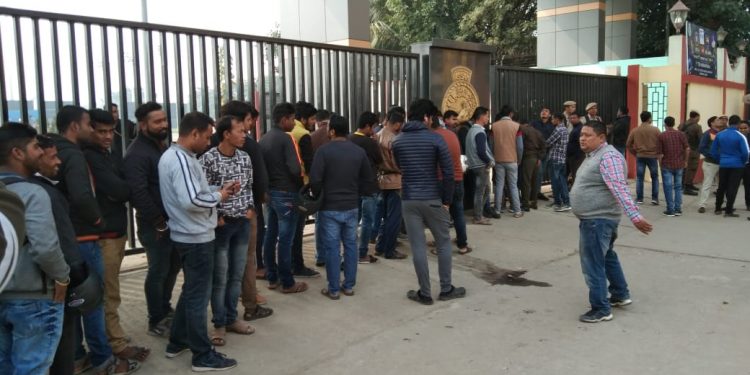 Cricket fans in Guwahati on Saturday, are again angry with the Assam Cricket Association.

On January 5, cricket fanatics of Assam were angry because the first India-Sri Lanka T20 match was abandoned in Guwahati because of shameful “school boy error”.

And on Saturday, cricket fans were forced to run for your refund of tickets. Otherwise, they fear, the Assam Cricket Association (ACA) will pocket the money.

The ACA stadium at Barsapara on Saturday witnessed a mad rush of fans, frantically trying to get the refund for the tickets for the doomed T20 cricket match.

Utter chaos prevailed at the stadium as cricket fans were desperate trying to get their hard-earned money back.

Ironically, only one counter was opened for the refund, making the task more difficult for the spectators.

What was more surprising is that money is being refunded to only those who had purchased tickets from Nehru Stadium.

Several thousand people had bought tickets through the different district sports associations across Assam, and the ACA counter refused to refund the money to them.

There was no specific instruction as to where they would get their money back from.

“This is really bad. First we could not enjoy the T20 match, and now they (ACA) refused to refund our money,” Ranjit Das, a resident of Panjabari, who had bought the tickets in Mangaldoi, said.

Moreover, there were many people at the stadium on Saturday whose tickets were mutilated because of the rain.

Refunds were denied to mutilated tickets, and especially if the serial number was either torn partially or missing from the tickets.

As per the ACA notification, refund would be made only for two days – Saturday and Sunday, and that too from 10 am to 6 pm.

“This is new a drama by ACA officials in the name of refund,” Gautam Sarma, a resident of Nalbari claimed.

There is strong apprehension amongst the fans that the ACA was trying to pocket a sizeable amount of money as several thousand fans will be unable to get their refund back.