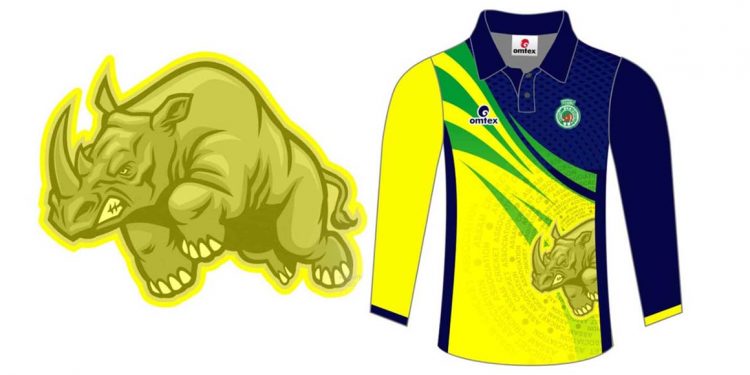 After the shameful “school-boy error” on Sunday at the first T20 match against Sri Lanka, the Assam Cricket Association has now added a “second horn” to the famous one-horned rhinos of Assam.

Assam Cricket Association (ACA) was caught on the wrong foot on Sunday when the grounds staffs at the Barsapara Stadium were found trying to dry the popping crease with hairdryers, vacuum cleaners and steam irons.

The BCCI and commentators including Akash Chopra, Harbhajan Singh, and VVS Laxman slammed the ACA for the “water leakage” into the popping crease. The match had to be abandoned because of the faux pas.

This time the ACA has portrayed that it has no idea as to how the state animal of Assam — the one-horned rhino looks like.

The yellow-black jersey of the Assam Cricket Team for the year 2019-2020, which has been manufactured by Mumbai-based Omtex Sportswear, had added a rhino on the front face of the sport shirt.

Surprisingly, the rhino on the ACA jersey has two horns, and definitely does not represent the state of Assam. Rather, it is an African rhino.

Why did the Assam Cricket Association (ACA) commit such a blunder? And how it remained unnoticed?

Senior ACA officials were not available for comments. The phone number 0361- 249030, which is there at the website www.assamcricket.com is an invalid number, a computerized voice said.

When contacted, Nishad Kora, an official of Omtex Sportswear told Northeast Now that the design of the jersey was approved by the officials of Assam Cricket Association.

“Our Director Kunal Patel had gone to Guwahati along with the designers to show the designs to the Assam Cricket Association officials,” Nishad Kora said.

The jersey of the Assam Cricket Team was produced only after the designs were approved.

However, wildlife experts of Assam are not at all euphoric with the Assam Cricket Association portraying the African rhino as the state animal of Assam.

“We are surprised and shocked to see two horn rhino on T-shirt of the Assam Cricket Team,” Bibhab Talukdar, founder and CEO of Aaranyak, a Guwahati-based wildlife conservation organization, said.

Talukdar, who is also the chairman of IUCN’s Asian Rhino Specialist Group, said the Greater one-horned rhino name itself suggests one horn.

“Perhaps the sports shirts are ordered from a country that has two-horned rhinos. Rhino being state animal of Assam needs perhaps greater awareness among game organizers,” he said.