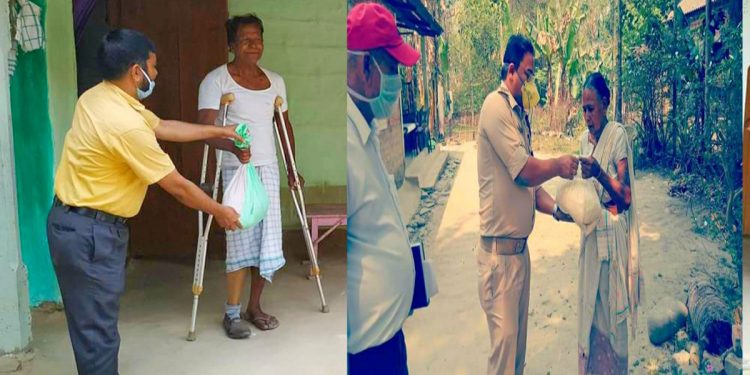 Various organisations, individuals, police personnel and political parties have come out to help the poor and needy people with food and essential commodities in various parts of Bajali in Barepeta district amid lockdown.

The nationwide lockdown, announced by Prime Minister Narendra Modi to contain the spread of COVID19, entered the 16th day on Wednesday.

Several individuals and organisations in Bajali area have also contributed to the Assam Arogya Nidhi (AAN) to fight COVID19 besides distributed food stuffs among the poor people who have suffered a lot due to the lockdown.

The Durga Puja Parichalana Samiti has also contributed Rs 20,000 towards the Assam Arogya Nidhi on Wednesday.

Apurba Chakrabarty, the block development officer (BDO) of Bajali Development Block, has also shown response to the call of Assam health and finance minister Himanta Biswa Sarma to take care of the poor by the service holders.

He distributed food packets to 10 families under his development block.

BJP state executive member Phani Pathak along with other party workers distributed food to 100 people who are financially weak and are in urgent need of food.

Pathak aims to distribute food to more than 1,000 needy people in the Bajali area.

The BJP, under the leadership of Nagen Choudhury, the president of Bajali District BJP, also distributed packets of essential commodities in several areas under various Panchayats in the Patacharkuchi constituency.