Assam: Congress’ vehement protests across State over high prices of petrol and diesel 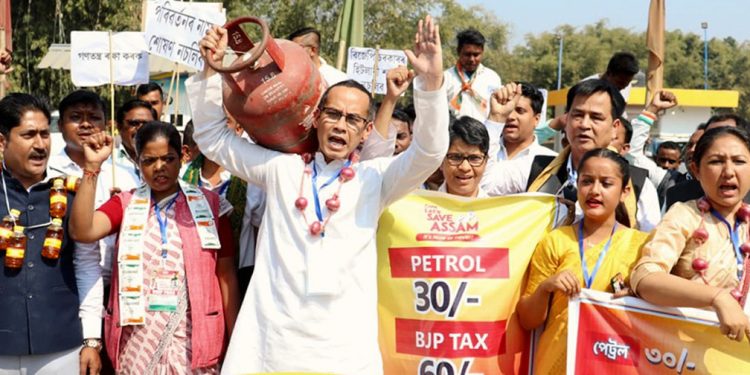 The Congress in Assam has intensified its protest against the sky-rocketing prices of petrol and diesel, as part of their “Axom Basaon Ahok” campaign for the upcoming Assam Assembly Elections.

On Sunday, the Congress staged demonstrations across the State against high prices of petrol and diesel.

In the Eastern Assam town of Dibrugarh, the Congress protest was led by CLP leader Debabrata Saikia.

Raising anti-BJP slogans, the Congress workers protested at Baruah and Company Petrol Pump at Seujpur in Dibrugarh and interacted with the locals.

Debabrata Saikia questioned: “The common man is burdened by price rise, so will the BJP Government clarify whom is it busy levying tax for? Who is this Government favouring at the expense of making people suffer so much?”

Ripun Bora said: “BJP’s insensitivity has run its time in Assam, as constant fuel hike has brought life to a standstill & people are now up in arms against it!”

Rakibul Hussain said, “Assam seems to have erupted on the issue of fuel hike, with people joining in the Congress’ protests all over state. This injustice in the name of governance will no longer be tolerated by people of Assam!”

My straightforward question to BJP Govt is- why this apathetic attitude specifically towards Assam & other north east states, where fuel prices are higher compared to other parts of the country! Why this step motherly treatment towards us?!#BJPPetrolTaxLoot#AxomBasaonAhok pic.twitter.com/VNVKu7jrci

In Golaghat, the Congress protest was led by Lok Sabha MP Gaurav Gogoi.

Gaurav Gogoi said: “BJP Government is mercilessly looting the public with hiked fuel prices- especially during a raging pandemic! On behalf of the people of Assam, I want to ask why this hike in petrol & diesel prices when international crude oil prices are low?”

Golaghat joined me in the protest against BJP's fuel hike today, standing up for the welfare of Assam & against BJP's anti-people policies! Assam will not shy away from voicing its concerns now & will see to it that despotic forces pack up & are forced to leave!#BJPPetrolTaxLoot pic.twitter.com/19nIQLmBd3