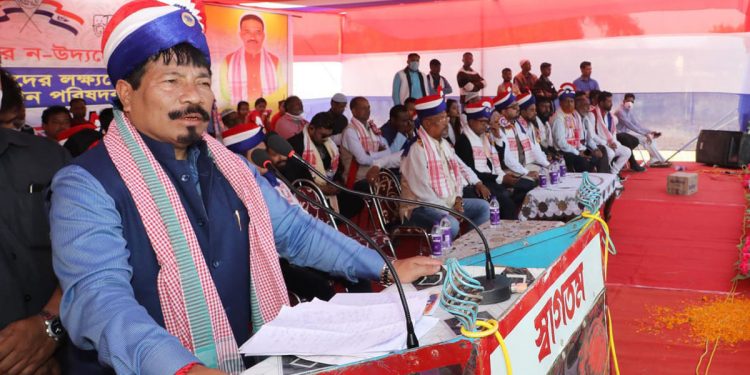 AGP president Atul Bora during a programme in Barak Valley.

The Assam Congress came down heavily on Asom Gana Parishad (AGP) president Atul Bora for his “derogatory remarks” on the Congress party.

In a statement to the media houses on Thursday, Bobeeta Sharma, chairperson of the media department of APCC, said: “Mindless utterances of AGP president Atul Bora in certain sections of media against the Congress party terming it as ‘communal’ has drawn the attention of Assam Pradesh Congress Committee.”

The Assam Congress reminded Atul Bora that “he has shifted to a party, who is known world over for its communal agenda”.

“People of Assam, India and the world have not forgotten the black shameful history of ‘Godhra’ and the politics of divide that BP supports,” Sharma said in the statement.

Sharma said, “He (Atul Bora) is in alliance with a party that talks of ‘battle of civilization’ and politics of 65% versus 35%. We want him to make it clear whether he supports this stand of BJP or not?”

The people of Assam had elected the BJP and AGP to deliver the poll promises “but they have failed miserably to fulfill those promises”, the statement said.

Sharma alleged “to divert attention from rising unemployment, price rise, corruption they are taking recourse to communal politics which has always been their agenda to create division among people to garner votes”.

The Assam Congress also wanted AGP president Bora to make it clear whether he supports CAA or is against CAA.

Sharma stated: “We want to remind him and the people of Assam are witness to how he and his colleagues threatened to step down from alliance if CAB is passed in Parliament. But what happened to their commitment to the people of Assam?”

“In the greed for power AGP is in alliance with a party like BJP,” the APCC media department chief alleged, adding, the saffron party is “not only destroying all regional parties in Assam but also the aspirations of the people of Assam”.

“AGP not only voted for CAA but is also going all out to implement CAA and give red carpet welcome to Bangladeshis and keeping the door open for generations to come through this Act,” the statement said.

Starting that “Congress is a national party with a regional outlook,” Sharma claimed, “Congress has always fought for issues that concern the state and voting against CAA is one such major issue.”

It claimed “Congress has always treated its allies with respect and never toed to destroy them as the BP has done to AGP, BPF and Ganashakti”.