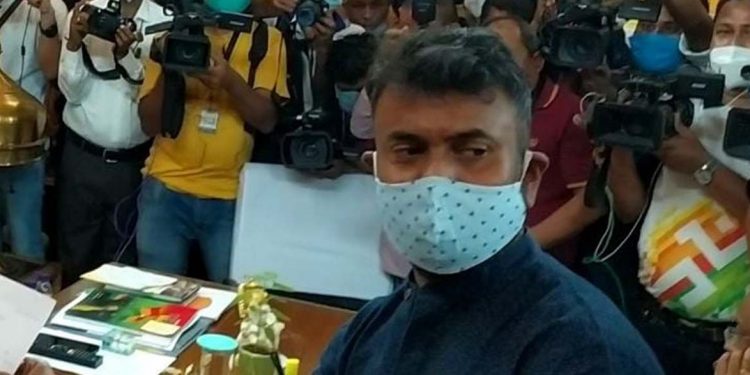 The Congress has expelled Mariani MLA Rup Jyoti Kurmi from the party’s primary membership with immediate effect for “anti-party” activities.

Kurmi on Friday submitted his resignation letter as the Mariani MLA to Assam Legislative Assembly Speaker Biswajit Daimary and quit the Congress to join the BJP. 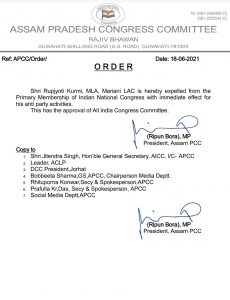 “Shri Rupjyoti Kurmi, MLA, Mariani LAC is hereby expelled from the Primary Membership of Indian National Congress with immediate effect for his anti party activities. This has the approval of All India Congress Committee,” said the order, issued by APCC president Ripun Bora.

After submitting his resignation letter to the Assembly Speaker, Rup Jyoti Kurmi announced that he would join the saffron party.

Kurmi said he would join the saffron party on June 21 during a function in Lakhimpur.

Immediately after announcing his plan to join the BJP, Kurmi came down heavily on the Congress leadership and he was all praise for Assam chief minister Himanta Biswa Sarma. 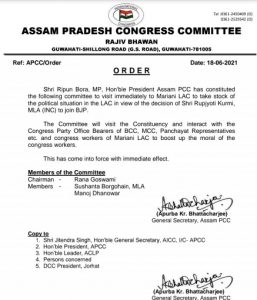 Meanwhile, APCC president and Rajya Sabha member Ripun Bora has constituted a committee to visit the Mariani Assembly constituency immediately to take stock of the political situation in the constituency in view of the decision of Kurmi to join the BJP.

“The committee will visit the constituency and interact with the Congress party office-bearers of BCC, MCC, Panchayat representatives, etc. and Congress workers of Mariani LAC to boost up the moral of the Congress workers,” said another APCC statement, adding, “This has come into force with immediate effect.”

The committee has been formed with Rana Goswami as its chairman and MLAs Sushanta Borgohain & Manoj Dhanowar as members.