With the advent of winter the custodians of wildlife in Assam have to work over time.

Various forces taking guard to protect the wildlife treasure of the State, especially the Brahmaputra Valley get extra cautious during this time of the year.

Even villagers in the fringe areas of various wildlife sanctuaries and national parks are on their toes to conserve the bio-diversity of the region.

Aaranyak, one of the pioneer wildlife and bio-diversity conservation organization has taken up slew of measures for this season. 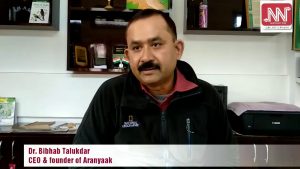 “Winter is a time when we witness flow of tourists and wildlife enthusiasts into the State,” said Dr Bibhab Kumar Talukdar, an internationally-reputed conservation scientist and the CEO of Aaranyak.

“However, it is also the time to remain alert against wildlife hunters,” he added.

“So, we work hard in sync with common villagers, village defence organizations, panchayat bodies, enforcement agencies including Forest department and the administration to protect the precious animals,” Dr Talukdar opined.

During this time of the year, wild elephants come out the forest in searches of food and water into the paddy and sugarcane fields.

This aggravates the human-elephant conflict that has already reached an alarming proportion in Assam.

One-horned rhinoceros who venture out of their safe haven also fall prey to poachers.

The numerous wetlands that dot the valley both within and outside protected forest areas are thronged by varied and precious migratory birds around this season.

This also invites a section of crooks who are on the prowl.

So, with the advent of winter green brigades get busy with active coordination from villagers and Forest department, police and administration and administrative officials for protection of these precious species.

In this regard, Aaranyak has been busy holding sensitization programme with panchayat members, VDO members seeking their cooperation to wildlife protection staff in respect of mitigating human-elephant conflicts, protection of animals that stray out of protected areas and also to protect winged visitors flocking the State around this time of the year.

Talukdar further added the organization has been trying to build sustained coordination between the villagers, VDOs with forest and police personnel for protection of wildlife resources in the state.

The efforts have paid dividends in the ground level and people have become proactive towards conservation especially in areas where we work constantly like in areas around national parks of Kaziranga, Manas and Orang.

Aaranyak also organizes orientation programme for judicial officers and lawyers also on Wildlife Protection Act, 1972 to ensure proper implementation of the clauses of this vital Act and hand out exemplary punishment against wildlife crimes.

The organization has organized several such workshops for district police officials in many districts of the State so far with active cooperation from the state police force.

Rohingya Issue: Focus on repatriation to Myanmar, not rehabilitation in Bangladesh