After 132 years hoolock gibbons reunited in Gibbon Wildlife Sanctuary, thanks to Aaranyak

The hoolock gibbons population of Gibbon Wildlife Sanctuary in Assam were divided into two compartments after setting up of the railway tracks, bifurcating the 2,098 hectare sanctuary

About 132 years after they were divided, a humble effort by some conservationists in Assam, have united the hoolock gibbons of two compartments of the Gibbon Wildlife Sanctuary.

The hoolock gibbons population of Gibbon Wildlife Sanctuary in Assam were divided into two compartments after setting up of the railway tracks, bifurcating the 2,098 hectare sanctuary.

Since the setting up of the railway tracks through the Gibbon Wildlife Sanctuary by the then British government in 1887, the tracks became a very sensitive barrier and threats for the wildlife, particularly for the arboreal species like hoolock gibbon of the sanctuary.

Due to this railway track passing through sanctuary the populations of hoolock gibbon in the compartment–I lost their communication with their counterparts in compartment-II for last 132 years.

“And this isolation has been going on till this year when the rapid plantation drive by the locals and an wildlife NGO called Aranyak succeeded in creating a natural Canopy Bridge for Gibbon connecting both sides of the wildlife sanctuary (compartment I and II),” said Dilip Chetry, head of the Primate Research and Conservation Division of Aaranyak, scientific and industrial research organisation based in Guwahati. 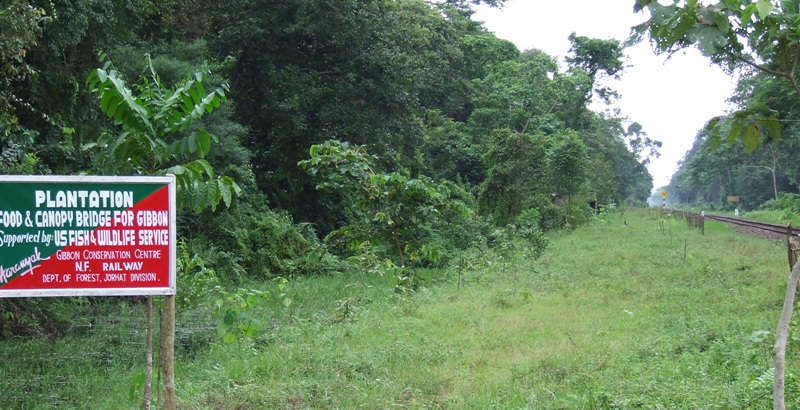 “Aaranyak came forward to bridge this canopy gap as a part of hoolock gibbon conservation programme. A series of plantation drive was carried around the sanctuary keeping in mind the long term conservation of hoolock gibbon and other wildlife of the sanctuary. Plantation drive was carried out along the 1 km railway tract within the railway land with the help of local community,” he said.

He further said that 3000 saplings of 71 species, food and lodging plants of the gibbon were planted in 2006 on either side of the railway track.

“The ultimate goal of these plantation programmes was to develop natural canopy bridge. Many of these planted trees were even felled by the railway department annually. At last at one point Canopy Bridge has formed in 2019. It took 13 long years for the development of this bridge,” he said adding that as gibbons, capped langurs, squirrels are using this bridge regularly.

The barrier created by the railway line is no more with this new path of connection.

This canopy bridge has rejuvenated the process of reunion of gibbon in particular and other wildlife of compartments I and II, he added.

The development assumes significance as the Gibbon Wildlife Sanctuary is the first protected area in the country where gibbon is the target species for conservation.

Located on the south bank of the Brahmaputra river system in Jorhat district and is an isolated forest pocket which sustains a substantial population of Hoolock Gibbon.