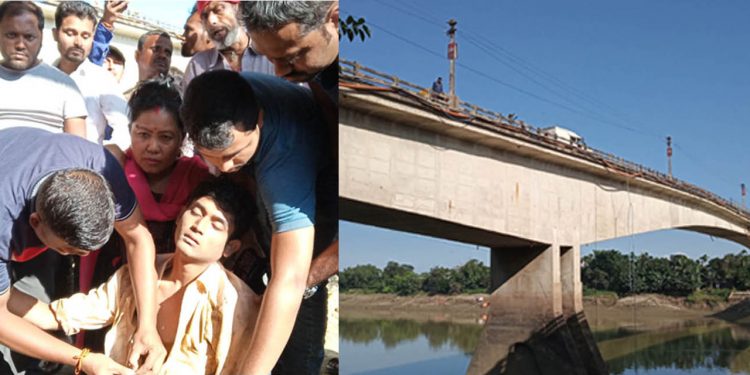 Satyayan Dey, a first semester B.Com student being rescued by locals after he jumped from Barak Bridge (right) in Silchar on Tuesday. Image credit - Northeast Now

Call it a stroke of luck or timely intervention by the locals staying near the banks of river Barak, crisscrossing Silchar town, who saved a college student from dying on Tuesday.

Yes, this is true.

Satyayan Dey, a first semester B.Com student of Guru Charan College, jumped from the old Barak Bridge on Tuesday afternoon, only to be pulled out on time by the residents living near the banks of river Barak.

Northeast Now, upon reaching the spot, found some locals calling for an ambulance as well as the police to rush to the spot at the earliest and save the life of this student, who attempted suicide.

The timely arrival of an ambulance and with the help of the locals, Satyayan was rushed to Silchar Medical College and Hospital (SMCH) for speedy treatment.

Meanwhile, Satyayan’s father, a retired government employee, Sujit Kumar Dey, was informed about the incident and he rushed to SMCH.

However, Satyayan’s father remained tight-lipped over what could have forced his son to take such a step.

At the time of filing of this report, Satyayan’s elder cousin Sandipan Dey told Northeast Now that as of now, he is still in SMCH but out of danger as declared by the doctors.

Sandipan added, “Let him come out of this ordeal, only then, we would try to find out as to why he took such a drastic step of jumping from the Barak Bridge after coming out of his classes in college.”