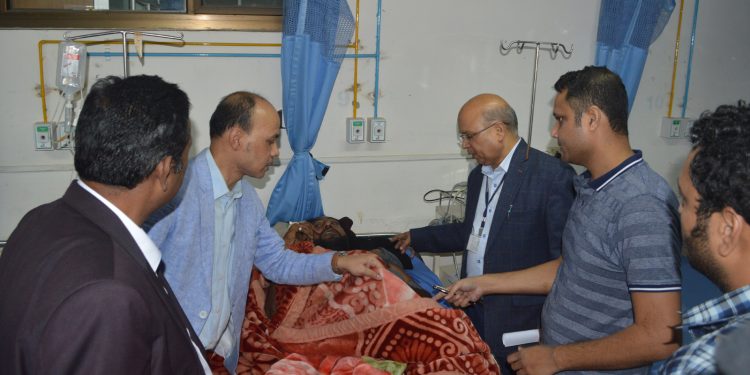 Many severely injured BSF jawans, due to a road mishap on Wednesday, are still undergoing treatment in NEIGRIHMS, Shillong.

One civilian (helper) died and 22 others including 20 BSF jawans received injuries as a bus in which they were travelling fell down in a gorge at Umtyrra in East Jaintia Hills on Wednesday.

The bus was requisitioned by the 93 Bn ‘A’ Coy of Border Security Force (BSF).

Immediately after the mishap, all the injured were admitted to the Khliehriat community health centre of Meghalaya.

But later they were referred to North Eastern Indira Gandhi Regional Institute of Health and Medical Sciences (NEIGRIHMS).

The NEIGRIHMS director has appreciated the doctors and other staff for extending treatment to the injured BSF jawans.

“Twenty two patients were referred to NEIGRIHMS after a bus carrying BSF Jawans went off road and fell into a deep gorge at Umtyra in East Jaintia Hills on October 30, 2019,” the NEIGRIHMS PRO stated.

In a very short notice, all the department heads of the Hospital were alerted by hospital administration of NEIGRIHMS.

“The patients started reporting to NEIGRIHMS Casualty from 9 pm,” he added.

The hospital PRO said the doctors for the whole night operated upon the patients and stabilised them.

“Three patients are admitted in the ICU, five in the Orthopaedics ward, three in the Casualty, one in Neurosurgery, one in General Surgery ward, and the rest were discharged after the necessary treatment,” the PRO shared.

The director of NEIGRIHMS visited all the admitted patients along with the heads of the departments of Orthopaedics, General Surgery and the medical superintendent.

“Director NEIGRIHMS, Prof (Dr.) D. M. Thappa appreciated the doctors and other staff who worked whole night to save the precious lives.”

On the day of the mishap, Lakador Syiem, superintendent of police, East Jaintia Hills, told Northeast Now, “At around 4:30 PM, an overspeeding bus with registration No. AS-05C-2034 went off road and fell in a gorge (approx 100 ft) at Umtyraa in East Jaintia Hills.”

“Most of them received serious injuries; however, none succumb to injury. All injured persons have been shifted to Khliehriat CHC,” he had said.