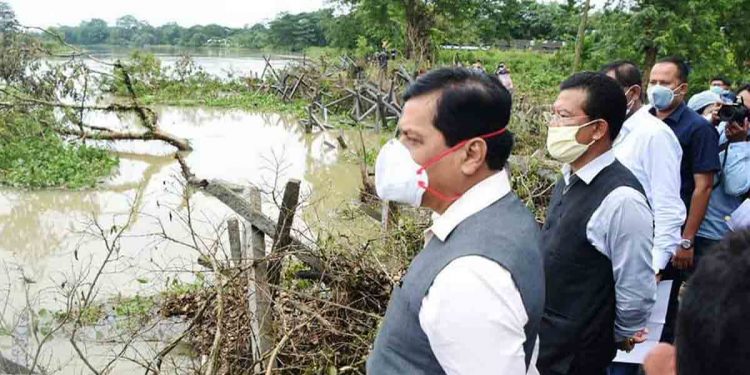 Assam Chief Minister Sarbananda Sonowal on Wednesday visited the flood and erosion hit areas of Lakhimpur and inspected the various embankments in the district.

Sonowal visited Hekerajan in Bogeenadi under Dhakuwakhona sub-division in Lakhimpur and inspected the site of the affected portion of Hekerajan eroded by the Subansiri.

Sonowal also visited the areas affected by erosion by Charikodiya river near Dhakuwakhona College in Dhakuwakhona.

CM Sonowal inspected the erosion-protection works carried out by the state water resources department at Balighat near Na-Ali on the downstream of Subansiri.

The Chief Minister arrived in Dhalpur under Narayanpur Revenue Circle from Gohpur on Tuesday afternoon and straightway went to erosion hit Jamuguri area of the district.

He visited the worst affected the No. 3 check-bund off the Brahmaputra in Bonpuroi area of Jamuguri.

Speaking to the media persons Chief Minister Sonowal announced that riverbank erosion had been categorized as a natural calamity in the 15th Finance Commission and works would begin as soon as the funds meant for it received.

He also thanked Prime Minister Narendra Modi for creating North East Water Management Authority with Deputy Chairman of NITI Ayog as its President and members from all NE states to prepare a project report on the flood-erosion problem of the region to mitigate the problem.

Later the Chief Minister arrived at North Lakhimpur and held discussions with officials of the district administration on flood and erosion situation.