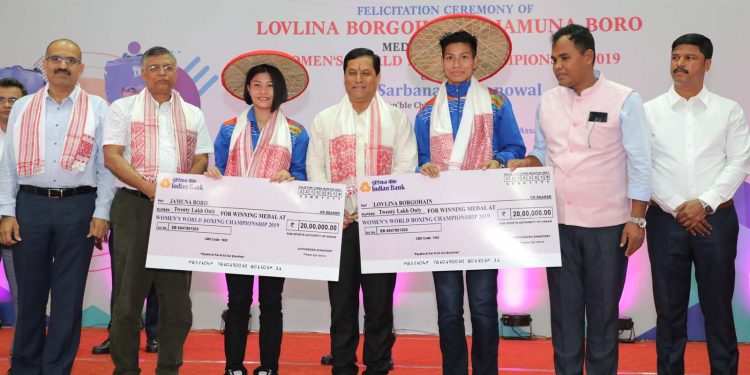 They were presented the cheques under the State Sports policy.

Lovlina, who hails from Goalghat district, had to settle for bronze as she was defeated by China’s Yang Liu in the 69 kg category in a split decision of 2:3 to end her campaign at the championship.

On the other hand, Jamuna Boro, who hails from Dhekiajuli under Sonitpur district, also settled for bronze after her defeat in the semi-final match of the AIBA World Boxing Championship.

Chief minister Sonowal felicitated both the medal winners from the state.

Both boxers have taken great strides through their performances, having won ?at the recently concluded Women's World Boxing Championship in Russia. pic.twitter.com/prPjuCcnJE

Saying that the feat of both the women pugilists at international stage had brought laurels to the state and country, the CM urged them to vie for Olympic glory and strive for continued success at the world stage.

Sonowal also spoke about the state government’s initiative in setting up football and archery academies for ushering in a period of development in the sports sector.

He also urged the parents and teachers to join hands with the government to create a pool of successful sports persons from the state.

The CM stressed on the need to incorporate scientific training and improved infrastructure for rapid development of sports culture in the state and said that state government was taking all necessary steps in that regard.