Government to provide all assistance to set up cultural complex for promoting Tiwa culture and Jonbeel Mela: Sonowal 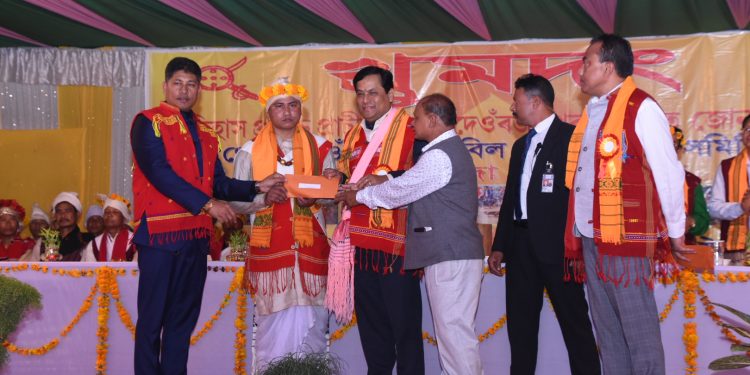 Assam chief minister Sarbananda Sonowal on Saturday said the historic Jonbeel Mela is the manifestation of traditionality and unity.

He also said it is an inspiration of self-dedication for beauty and serenity for the people belonging to Tiwa community and others.

Speaking at the Jonbeel Mela premises along the bank of Jonbeel at Morigaon district, chief minister Sonowal said the historic Jonbeel Mela which is a celebration held under the auspices of Gobha King is a celebration of the exchange of agricultural products between hill and plain tribes.

This unique and colourful festival of Tiwa community adds essence to the unique and diversified culture of Assam, he said.

He also said that the traditional, social, cultural and spiritual aspects of Tiwa community are very strong.

Sonowal said his government is committed to protect the land, language, culture and dignity of the people of Assam.

He also said his government is according honour to all the stalwarts belonging to different communities and ethnicities.

He also said that as soon as the present government took charge, it convened a meeting involving 70 organizations of tribal and ethnic communities.

The State Government held discussions with the organizations to understand their aims and aspirations and accordingly his government formulated policies.

Sonowal said the Gobha Kings are the pillars around whom the traditions, history, culture etc of Tiwa community revolves and he asked the younger generation to carry forward the rich traditions of Tiwa community to make it richer and more colourful.

He also said the great Chaulong Siu Ka Pha helped in the formation of greater Asom taking all small and big communities together.

Sonowal also said his government would set up a cultural complex for the sustenance of the traditions, history and heritage of Jonbeel Mela.

He also asked deputy commissioner of Morigaon Rituraj Bora to take immediate steps to give the cultural complex a concreate shape.

He also said the people of Assam embraced the State Government whole-heartedly and maintained that though several attempts were made to make the government weak, people in general did not pay any heed.

He also narrated his government’s plan of transforming Jonbeel Mela into an important global tourism event.

Minister of state for health and family welfare Pijush Hazarika, chairman of Fishfed Ramakanta Deuri also spoke on the occasion.

Deputy commissioner of Morigaon Rituraj Bora and host of dignitaries from the fields of sports, culture etc were present on the occasion.

Synchronising with the occasion, Sonowal presented government allowance to Gobha Kind Dip Sing Deo and 18 others to the tune of Rs one lakh each.