The budget session of Assam Assembly started on Monday, which will continue till August 13 with 15 working days. 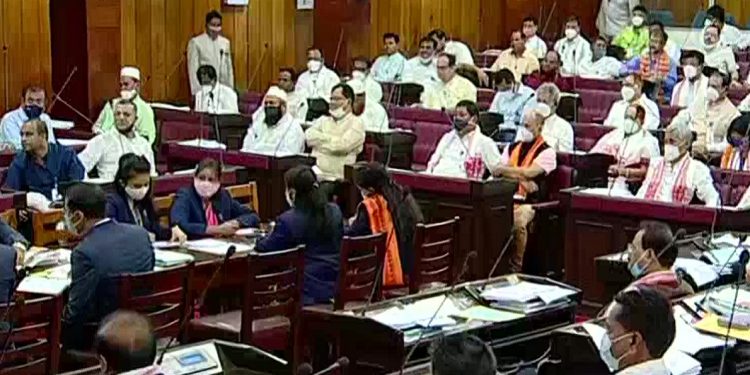 The opposition MLAs in Assam, on Monday, the first day of budget session, staged a walkout in protest against high prices of commodities.

The opposition MLAs demanded discussion on high prices of commodities in Assam, including fuel, which was rejected by Speaker Biswajit Daimary.

In protest against rejection of their demand, the opposition MLAs led by the Congress and AIUDF staged a walkout.

The 15th Assam Legislative Assembly started its first Budget session from Monday, which will continue till August 13 with 15 working days.

The Assam Government is likely to introduce a total of 14 bills, including the Assam Cattle Preservation Bill 2021 in the Budget session.

Earlier in the day, the opposition parties’ MLAs in Assam, staged a protest at the Assembly premises against CM Himanta Biswa Sarma’s recent remark on role of legislators.

Chanting ‘Save Democracy’ slogans, the MLAs of the opposition parties in Assam staged demonstration outside the House, in the Assembly premises.

The opposition MLAs have demanded Assam chief minister Himanta Biswa Sarma to withdraw his remarks, made during a public meeting at Sarbhog constituency recently.

“The Assam CM wants to install an authoritarian state by trying to minimise and spreading misinformation on the role and responsibilities of an MLA. It is a threat to democracy,” Leader of Opposition and senior Congress leader Debabrata Saikia said.

He added: “The Constitution has specifically mentioned the roles and responsibilities of MLAs. Legislators are meant to look after their own constituencies, see that benefits of schemes reach the common masses, among others. They (MLAs) are not merely meant for framing laws and speak only before the speaker.”

Meanwhile, Sivasagar MLA Akhil Gogoi said: “The Assam CM should not speak nonsense like an immature person and should respect democracy and the Constitution.”

Assam CM Himanta Biswa Sarma recently said that role of an MLA is confined only to framing laws, while it is the duty of the ministers to implement them.