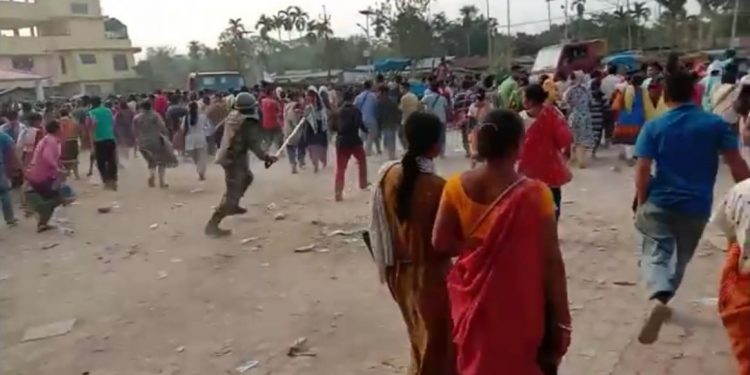 Distribution of free tin roofing sheets, under Welfare of Plain Tribes and Backward Classes (WPT&BC) turned out to be a spectacle and mass hysteria in Assam’s Karbi Anglong on Wednesday.

The police and paramilitary personnel had to be pressed into duty to control the situation.

They had to resort to firing in the air and baton charge the public.

The chaos started at around 3 pm when all of a sudden a crowd gathered at the Hawkers Rehabilitation Centre where the tin sheets were stored.

The crowd comprising those who are not getting any of the freebie, become agitated and starting pelting stones towards the building.

The police had to baton charge the unruly crowd to control the situation.

In the process some got beaten and some got trampled but there was no report of any serious injury.

From last Sunday, words spread that one can get tin roofing sheets free of cost if one has the signature of chief executive member (CEM), Karbi Anglong Autonomous Council (KAAC), Tuliram Ronghang.

Even housewives and women from well to do families and women of government employees participated in the mass hysteria.

On Monday, a frenzy was seen among the women, mostly married, to acquire the roofing sheets.

Mothers with babies on a sling on their shoulders were seen thronging the CEM’s residence, both private and official, for his signature.

The lure for a bundle of free tin roofing sheets has created such a mass hysteria that soon the men folk joined in with their women.

The town’s main market, from March 9, even though it was a holiday on account of Holi festival, was swarmed and flooded by women to have their documents photocopied.

Some of the women alleged that their documents were thrown away, some alleged that a few have got many bundles of the tin sheets and they have none.

The situation turned worse to such an extent that on the night of March 10 women with babies in tow shouted slogans against the CEM in front of his gate.

The tin sheets at the centre of all these drama measures four feet by eight feet and it is of good quality.

Previously, the bundles of tin sheets were given to selected 10 beneficiaries, particularly the needy, within a ward in the area of Diphu Municipal Board by the ward commissioners.

But some days ago word spread that if they have the signature of CEM, KAAC, Tuliram Ronghang, then one can get the free roofing sheets.

And the mass hysteria started in Karbi Anglong centering at Diphu.