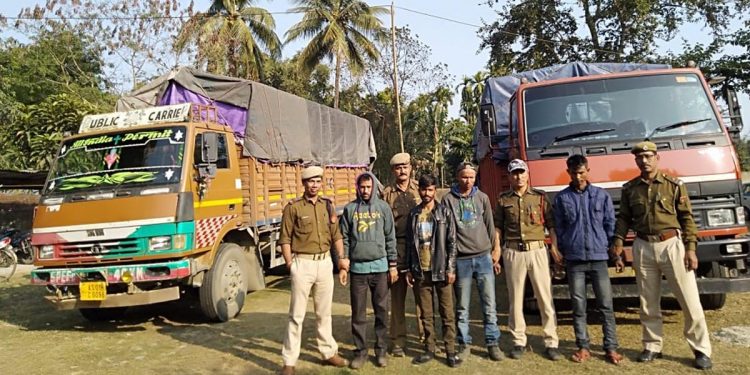 Sources said police received information that Arunachalee wine would be transported illegally in the early morning on Tuesday from Banderdewa via Gohpur (without any valid documents) in two trucks.

Based on the secret information, a Naka was laid on Tuesday by the officer-in-charge of Helem police station near the Helem PS.

In the meantime, the police team intercepted two six-wheeler trucks with registration numbers AS-01LC-5714 and AS-01HC-0096.

“During checking of the intercepted trucks, each was found to be carrying 300 cartoons of Arunachalee wine without any document,” said Biswanath superintendent of police Rakesh Roshan.

Following the seizure of the truck along with Arunachalee wine, the police arrested three persons including the owner of the truck No AS-01LC-5714.

The police arrested 28-year-old Md. Parman Ali, son of Lt. Tofir Ali, resident of Baghargaon under Boko police station in Kamrup (Rural) district, who is the registered owner of the truck.

The police also arrested the driver of the other truck bearing registration No AS-01HC-0096.

“Interrogation is on to arrest the other accused involved in the case. All the accused will be arrested and forwarded to the judicial custody tomorrow,” the Biswanath police chief said.

The Biswanath police also informed that on the night of January 11, 2020, the Helem police under the leadership of the officer-in-charge of Helem PS had seized one truck bearing registration No AS-07AC-3188.

The police also had recovered 90 cartoons of Arunachalee wine from the truck on being transported to Tezpur without any document and had forwarded the driver and handyman to the judicial custody.