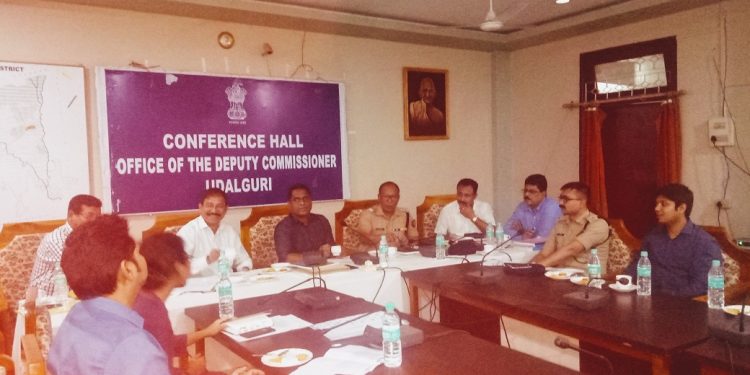 Dr M Angamathu, commissioner of North Assam Division visited the deputy commissioner’s office in Udalguri on Tuesday to take stock of the district’s preparedness for the forthcoming parliamentary elections, 2019.

The divisional commissioner emphasized on the importance of working as a team with individual responsibilities to conduct a smooth and fair election. He highlighted the importance of EVM-VVPAT hands-on-training for all polling personnel as well as zonal/sector officers.

He also added that special attention should be given to polling personnel of all women polling stations by providing assistance of trained personnel, if possible. He also laid focus on updation of electoral roll and preparation of error-free marked copies of electoral roll. He suggested that civil and police personnel should work in close collaboration to achieve the collective goal.

He also asked to ensure that basic amenities like safe drinking water, medicines are provided to polling and police personnel on poll duty. He also stressed on laying extra care for Voter Verified Paper Audit Trail (VVPAT), as it is being implemented for the first time. He also stressed on the need to ensure that persons with disabilities (PwDs) voters are provided adequate facility on the day of the poll and no such voters are left behind in the polls. He further stressed on the importance of keeping proper records of VVPAt slips as they may be tallied with result displayed on CU (as done in last Assembly election of Madhya Pradesh).

He advised that proper attention must be given to ‘shadow areas’. Further he advised to keep reserve machines to a maximum number.