Congress on Wednesday night announced its third list of 26 candidates for the ensuing Assam Assembly elections 2021.

The third list of candidates for the second phase has been released by the in-charge of the central election committee (CEC) of the All India Congress Committee (AICC) and party general secretary Mukul Wasnik. 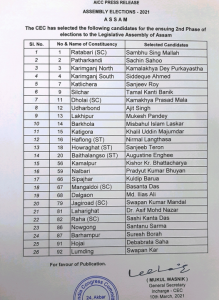 Suresh Borah has been given Congress ticket to contest for the Barhampur Assembly seat, which has been represented by Asom Gana Parishad (AGP) leader and former two-time Assam chief minister Prafulla Kumar Mahanta for the last six terms.

Mahanta has been denied AGP ticket this time and BJP has fielded Jitu Goswami for the Barhampur seat.