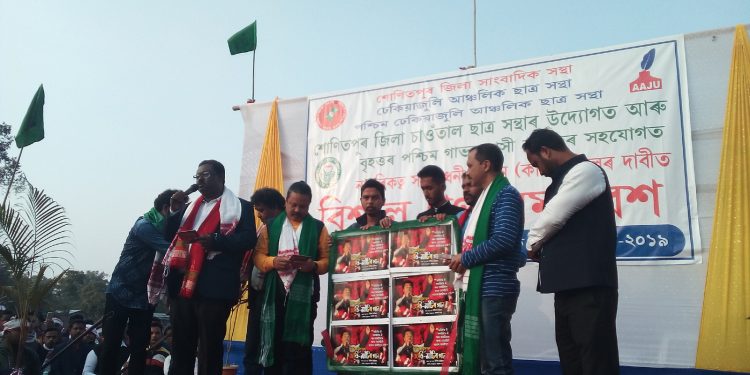 The Assam artistes on Wednesday raised their concerted voice against the Citizenship Amendment Act (CAA), 2019 at Kawaimari under Thelamara police station in Assam’s Sonitpur district.

Three popular singers of Assam – Mahendra Hazarika, Bipin Saodang and Manash Rabin – while participating in an anti-CAA rally at Kawaimari said it is unfortunate that despite massive protests against the Act across the country, the BJP-led central government is yet to reconsider the matter.

The anti-CAA rally was organized by the All Assam Journalists’ Union (AAJU) in association with the Thelamara unit of All Assam Students’ Union (AASU).

The trio artistes presenting their revolutionary songs urged the people from all walks of life to continue the anti-CAA protest until it is scrapped for the greater interest of saving the cultural and linguistic identity of the indigenous people of the region.

Addressing the rally, senior journalist Anjan Goswami said the government is misleading the people by saying that the Act wouldn’t harm the people of the region.

“We are concerned about the Act that if once it is implemented in the region, the total demography will be changed posing a serious threat to the indigenous people,” said Goswami.

“Instead of doing that the government should make a policy of deporting the existing Bangladeshis who have already jeopardized the region from all sides,” he said.

The speakers urged the people to remain alert every time so that evil elements cannot divert the anti-CAA movement from its track.

At Pithakhowa centre in Bihaguri area, the Bihaguri Karmaveer Chandranath Sharma Sahitya Sabha and the Bihaguri Anchalick Senior Citizens’ Forum jointly staged a sit-in demonstration with a demand to scrap the CAA.

The anti-CAA event was attended by Anjan Goswami and Pulin Bhattacharya from Sonitpur Senior Citizens’ Forum, Keshab Chandra Das from the AJYCP, Bhaskar Patangia from the AASU, ex-AASU leader Dilip Bora and artistes Bhaskar Mounash and Dharmendra Nath among others.