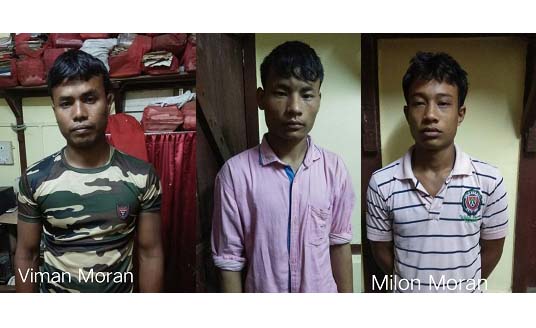 The Dao Division of the Army foiled an attempt by the United Liberation Front of Asom – Independent (ULFA-I) to induct new recruits by apprehending three linkmen of the militant outfit and four youths from Kakopathar area of Tinsukia district on Sunday night.

According to the Army, an operation was launched on Sunday night after getting specific intelligence inputs that an over-ground worker of the militant outfit, Monikanta Moran, was coercing young and unemployed youths from Boraligaon and adjoining areas of Kakopathar to join the ULFA-I.

ULFA-I linkman Moran was supposed to escort the new recruits to the militant camps of the outfit across the India-Myanmar border on the night of August 5, said Army sources.

On getting information, troops of the Dao Division of the Army carried out checks on all possible routes and at around 8 pm, an Army column intercepted seven individuals coming on four motorcycles. “Three among those were found to be over-ground activists of the ULFA-I including Monikanta Moran, who was dressed in fatigue and was carrying 20 litres of diesel in his motorcycle,” said Army sources.

The other two were identified as Viman Moran and Milon Moran. Four youths whose names have been withheld by the Army for security of their families were found to be new recruits. All of them were later handed over to the Kakopathar Police Station.

All the three linkmen along with four other youths were handed over to the Kakoapathar Police Station after initial questioning. The pro-active action by the Army has further dented the propaganda machinery and saved innocent youths from failing prey to he nefarious designs of the proscribed ULFA-I.

Ahead of the Independence Day celebration, the rebel groups are trying to best to sabotage the celebration, said sources.