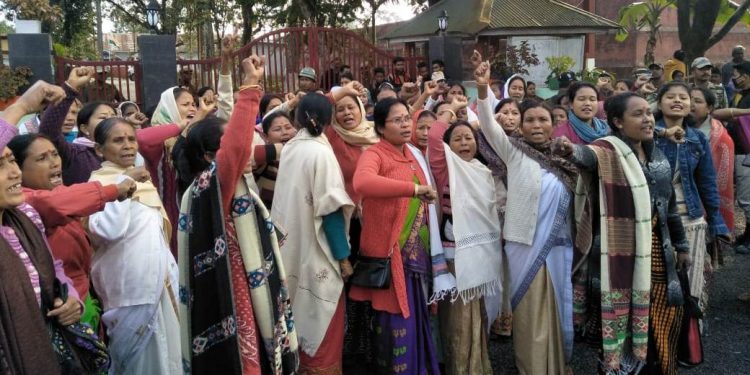 Police on Monday arrested a Krishak Mukti Sangram Samiti (KMSS) leader in Dibrugarh for his alleged involvement in violence during anti-CAA movement.

Following his arrest, locals of Tingkong staged a blockade on the Rajgarh road and demanded his immediate release.

“Sashi Sensowa was arrested for his participation in anti-CAA movement. His arrest was a ploy to weaken the anti-CAA movement. We have condemned such act. We demand for his immediate release,” said Hemanta Konwar, Dibrugarh district secretary of KMSS.

The protesters chanted slogans against the government and demanded for the release of their leaders.

“His arrest was a ploy to derail the anti-CAA movement. We demand his release because he had done nothing wrong. We will continue our protest untill the CAA is not repealed,” a protester said.

KMSS leader Akhil Gogoi was arrested by Assam police in Jorhat on December 12 as preventive measures amid protest against the Citizenship (Amendment) Act.

On December 13, Guwahati police registered a suo moto case against him.  On December 14 Gogoi was handed over to NIA.

The NIA booked him under the Unlawful Activities (Prevention) Act (UAPA) and he is now being lodged in Guwahati central jail.

Dibrugarh SP Sreejith Tiraviam said, “Sashi Sensowa was arrested in connection with violence, vandalism and arson cases. We have all the evidences against him and arrested him on the basis of evidences. We have enough evidence against the persons who were involved in vandalism and violence.”

During the movement many government installation were damaged. Chabua MLA Binod Hazarika’s house was also burnt down during the violence.