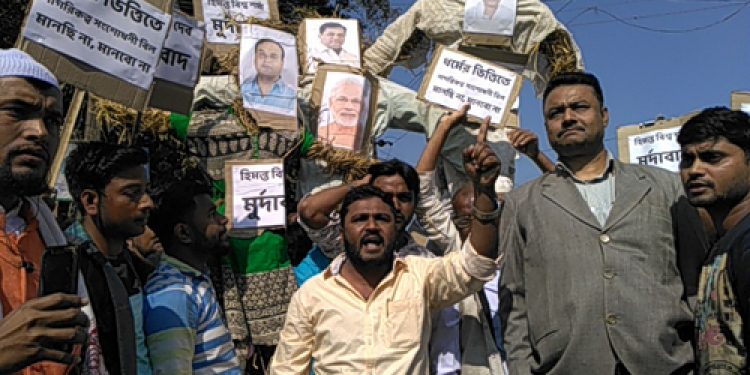 Supporters and members of AGP in Sonai constituency of Cachar district, along with a host of other NGOs, vented their ire over the passing of the Citizenship Amendment Bill in Lok Sabha.

Protesting on the streets of Sonai bazaar on Wednesday afternoon, this motley crew, shouted slogans against Prime Minister, Narendra Modi, Chief Minister, Sarbananda Sonowal, Finance minister, Dr Himanta Biswa Sarma and All India Mahila Congress President and MP from Silchar, Sushmita Dev, for their hand in getting this bill passed.

The members also burnt effigies of these leaders on the streets of Sonai and condemned the act, for these leaders have marginalized the minorities, said, Sufian Laskar, Central Organising Secretary of AGP’s Yuva Parishad.

Talking to Northeast Now, Sufiyan Laskar, said, “The bill has been passed in Lok Sabha on communal lines. We have burnt effigies of the PM, CM and Sushmita along with the traitor Himanta Biswa Sarma.”

He added, “Sushmita Dev in particular, who won from Silchar’s MP seat getting more than 50,000 votes from Sonai, has betrayed her voters today. Sitting in Delhi she has taken the wrong move and I would challenge her that she won’t be able to enter Sonai constituency, next time round. I even challenge Dr. Himanta Biswa Sarma for the same of getting more than a 1000 votes from this place.”

Another youth leader too venting his anger on Sushmita Dev, said, “If Sushmita Dev is so much in favour of the Bangladeshis than let her go there. We are Indians to the core and we would select an MP from India for this seat.”

The agitating AGP members later submitted a memorandum to Circle Officer of Sonai highlighting their reservations against this bill.