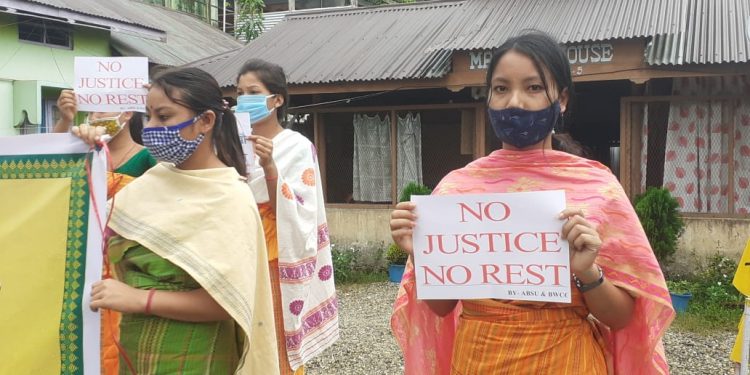 The All Bodo Students’ Union (ABSU) in collaboration with the Bodo Women Co-ordination Committee on Saturday staged a protest in Kokrajhar, demanding exemplary punishment for those involved in the recent in the rape and murder of two minor girls.

The organizations also demanded that the case be tried at a fast track court to ensure speedy trial and justice for the victims.

The two minor girls were recently found hanging from a tree at Abhiyakuthi in Kokrajhar district.

They had reportedly been gang-raped and murdered.

“We want the Assam government to ensure that the individuasl involved in the rape and murder case of two minors should receive stringent punishment,” said an ABSU member.

“The case should be tried in a fast track court so that the victims’ family gets justice and this will also serve as a warning against those who indulge in such heinous crimes,” he said.

Meanwhile, the protestors also demanded that the Assam government provide adequate compensation to the victims’ family.

The organizations also submitted a memorandum to the addressed to Assam chief minister Himanta Biswa Sarma, before the Kokrajhar district administration.

“We are grateful that the Assam chief minister visited the victims’ residence and met their family. We hope that he will provide all support to ensure that justice in this case is delivered,’ said N Narzary, a protestor.

“It is important that the Assam government take immediate strict measures to ensure the safety of of the common people and prevent such crimes,” she said.