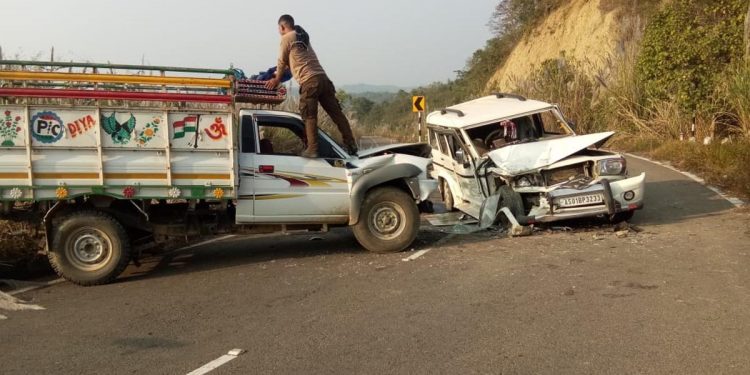 Nine people were injured in a road mishap at Borolalbong village under Langting police station in Assam’s Dima Hasao district on Tuesday.

Out of the 9 people, 5 received serious injuries in the road mishap.

The road mishap took place at 1:30 pm on Tuesday when a Tata DI pick-up van collided head-on with a Haflong -bound Bolero car.

The Tata DI was coming from Langting.

“The incident took place as the drivers while passing through the narrow route having a diversion of the National Highway, did not notice the vehicle coming from the opposite direction due to thick jungle,” said police.

The condition of the 5 injured persons is stated to be serious.

All of the injured people were given first aid at the Public Health Centre, Langting and later the seriously injured were referred to the Haflong Civil Hospital.

It may be mentioned that incidents of road mishap in between Manderdisa and Maibang have increased in the last few months.

The locals blamed the National Highway Authority of India (NHAI) for the road mishaps stating that the authority has failed to maintain the highway properly.

“The surface of the road was not constructed properly and the number of road diversion boards on the route is not sufficient due to which the drivers face problem. Deep jungles on both the sides of the road are also one of the main reasons for such accidents,” said locals.

Earlier on January 27, a road mishap took place at Maibang where one Swift car hit a scooty in which one youth did on the spot while another injured person was admitted to the hospital.

On Tuesday, in a major bus mishap in Goalpara district, six people were killed while 30 others were injured.