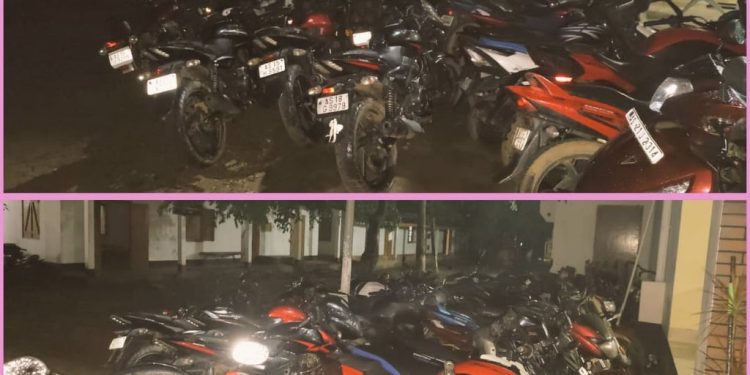 The bikes seized in Dudhnoi Credit-Twitter/@GoalparaPolice

The police on Sunday arrested seven bike-lifters at Dudhnoi in Assam’s Goalpara district in a major crack-down on a bike-lifting gang.

A total of 18 motorcycles were recovered from the possession of the accused.

The police arrested a total of 17 bike-lifters and seized 38 bikes from different places of the district in the past 48 hours.

On the other hand, the Goalpara police has informed through its Twitter handle that two members of a bike-lifting gang were nabbed from Meghalaya recently.

The gang was involved in smuggling of two-wheelers along the Assam-Meghalaya inter-state border.

The police recovered three vehicles from them.

In a #MassiveCrackdown on #BikeLifterGang, 7 more arrested & lot of Bikes(18) recovered,in the last 48 hrs.
So far,
Total Criminals arrested: 17
Stolen Bikes recovered: 38
PS: Dudhnoi campus glittering with Bikes in one of the biggest recoveries in a single case 🙂#HUNTAtItsPEAK pic.twitter.com/soubCbw5wJ