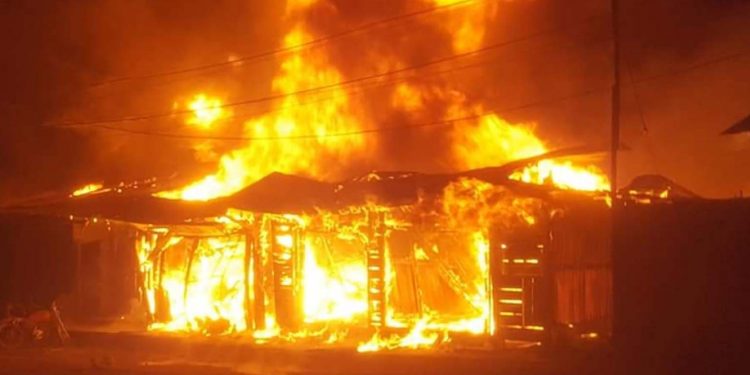 A four-year-old kid lost his life after a massive fire broke out in a flat at Ambikapatty area in Silchar on Saturday.

Locals said the fire broke out in the flat of Ramendu Nath and Sarbori Nath on the fourth floor at the Dinesh Enclave around 1 pm when both of them were out of home and their minor son and a domestic help was at home.

While Ramendu is a businessman Sarbori is a senior official at the department of water resources.

The deceased minor has been identified as Ratnadeep Nath and the housemaid as 21-year-old Sipti Nath. The fire reportedly broke out due to a short circuit.

It is learnt that the minor had called his mother and informed her about the incident following which Sarbori Nath called the fire service and rushed home.

However, before the parents could reach, the minor unable to get out of the room, succumbed to the fire while the house maid also sustained major burn injuries.

Fire fighters reached the spot and rescued the maid and rushed her to the Silchar Medical College and Hospital while doctors at the hospital declared the child brought dead.

The incident sparked tension in the area. Cachar deputy commissioner Barnali Sarma reached the spot to take stock of the situation along with Cachar SP Manabendra Dev Ray and officials from the District Disaster Management Authority.

Sarma sounded emotional after meeting the parents of the deceased child and also learnt about the happening.

“ I have no words to express at the loss of the minor,” the DC Sarma Said as she asked circle officer Dhruvajyoti Pathak to facilitate treatment of the burn-hit housemaid at the hospital.

Sarma told reporters that magisterial-level probe will be ordered to scrutinise whether the residential apartments mushrooming across the town and the district are being constructed as per civic bylaws.