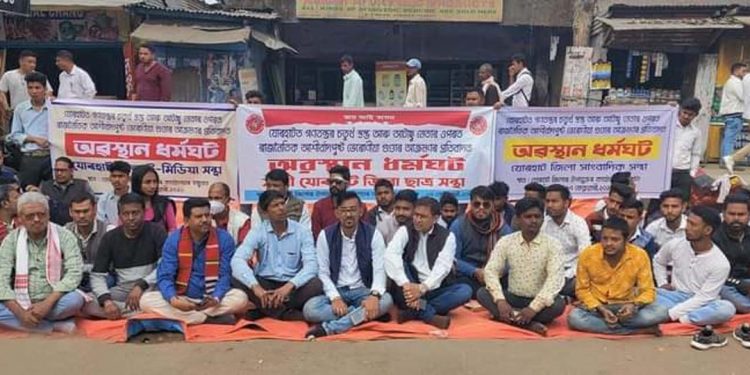 A view of the protest in Jorhat. Image credit - Northeast Now

Three persons have been arrested in connection with the assault of Paramananda Bora, a Jorhat-based reporter of an Assamese TV news channel, his colleagues and friends at the Jorhat office of the channel on Tuesday night.

The arrested persons have been identified as Rajib Bora, Shyamaljyoti Bora and Bhaben Gogoi, who reportedly belong to a right-wing Hindu organisation.

Two separate complaints were lodged at Jorhat police station, one by Paramananda Bora and the other by ATASU Jorhat district unit president Rajiv Gogoi, who was also present in the office of the channel (Pratidin Time) and was also manhandled by 16-17 youths.

Several organisations including AASU, ATASU, AJYCP and different media bodies in Jorhat staged sit-in demonstrations in front of the deputy commissioner’s office complex in protest against the assault and ransacking of the TV channel’s office.

The protestors also submitted a memorandum to the Jorhat deputy commissioner and sought stern action against all those involved in the assault and order a high-level probe into the incident.

On Thursday, all 16 AASU units in the district will stage a ‘black flag’ protest.

Goswami in a statement on Wednesday evening while condemning the incident sought strong legal action against those involved in the attack.

Seeking a high-level probe into the case, the Congress leader expressed concern over the “prevailing law and order situation” in the cultural capital of the state, staying that lawlessness ruled in Assam now.

He also alleged that members of an organization having the support of the ruling party few days ago had reportedly threatened people involved in business and trade at Jorhat.

Speaker of the Assam Legislative Assembly and Jorhat MLA Hitendra Nath Goswami, who is in Guwahati, had also sent his representative to the channel’s office to be briefed on the incident.