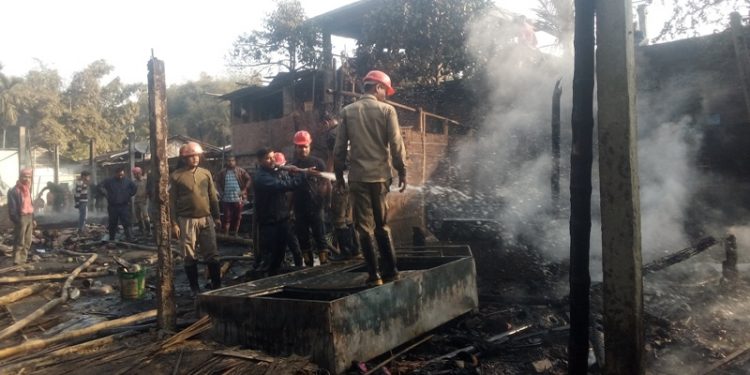 Four fire tenders from Jorhat Fire Station were pressed into service to douse the massive fire.

Two persons were injured and three houses were gutted in a fire at Jankhona village of Baligaon area in Jorhat on Saturday morning.

Four fire tenders from Jorhat Fire Station were pressed into service to douse the massive fire.

The houses and all belongings of the families of Nanda Das, Ramen Das and Pankaj Das, brothers living in the same compound were destroyed in the blaze.

Though the exact cause of the fire was yet to be known neighbours stated that they heard someone shouting for help at about 6.30 am.

This was followed by the noise of an explosion, most likely to be of an LPG cylinder.
Neighbours rushed to help the families but could not save the belongings of the three families.

On late Thursday night, four houses were gutted in a fire at Sonari Mising Gaon at Teok in the district.

Villagers by throwing water and mud and later fire tenders from Jorhat managed to stop the spread of the fire to other houses.

The residents lost their belongings along with the granary in the blaze.