The BJP has taken a massive beating in the elections. 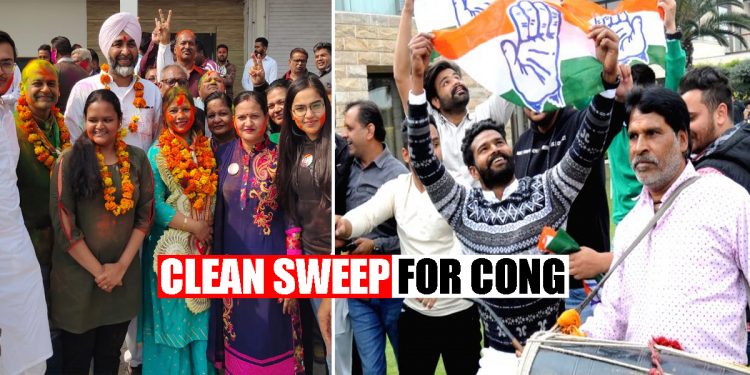 The Congress has swept the civic bodies elections in Punjab.

The Congress has won seven out of eight municipal corporations and is leading in 1 in Punjab.

Moga, Hoshiarpur, Kapurthala, Abohar, Pathankot, Batala and Bathinda – all went to the kitty of the Congress.

Notably, Bhatinda is returning to the Congress fold after 53 years.

Congress MLA and Punjab Finance Minister – Manpreet Singh Badal, who represents the Bhatinda constituency has expressed happiness over the Congress win in Bhatinda.

“History has been made today!” said Manpreet Singh Badal.

History has been made today!
Bathinda will get a Congress Mayor for the 1st time in 53 years!
Thank you to ALL Bathinda residents.

Congratulations to the people of Bathinda for a spectacular victory.
Kudos to all Congress candidates and workers, who toiled for this day. pic.twitter.com/Xvczq5MjfU

The Congress has also swept the elections to 109 municipal councils.

In almost all municipal councils, the Congress has either won or has taken massive leads.

This is a tight slap on the face of BJP, SAD and AAP by people of Punjab for playing with the feelings of our Anndaatas. pic.twitter.com/mH81fNxyyH

The outcome of the elections are significant as it comes amid farmers’ protests in the state.

The civic bodies elections is being seen as a semi-final before the Assembly elections in the State.

The beating that the BJP has taken in the civic bodies elections, especially in the Municipal corporations, may be perceived as a huge setback for the saffron party as it is being seen as an urban voter base party.