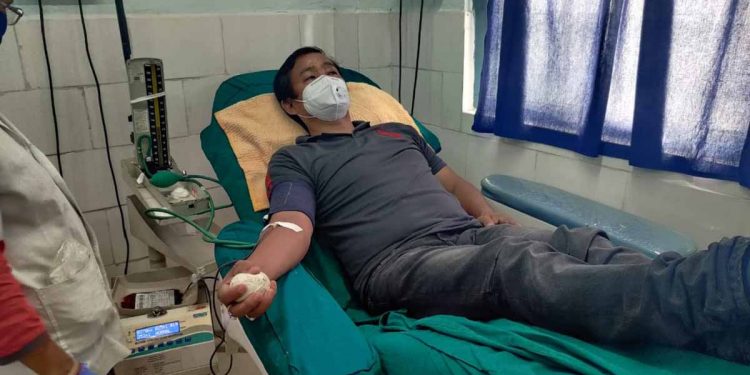 There has been a severe shortage of blood in the blood banks of the state, especially in the Itanagar Capital Region (ICR), and this has left patients battling various ailments with serious health issues.

The ICR has in the past four months reportedly registered six deaths due to lack of blood, three more than what the COVID-19 pandemic has claimed so far.

Adding to the woes of the patients, there is a sharp decline in the number of donors due to the fear of the pandemic.

Ramesh Jeke (28), a social worker who has been playing a pivotal role in creating awareness about blood donation since 2008, said that Arunachal Pradesh needs around 15,000 units of blood every year.

“For the ICR alone, we need a minimum of 30-35 units of blood every month. The cases of blood transfusion have, however, increased during the past few months, especially after the lockdown and we are in need of around 40-55 units,” Jeke said.

Jeke, who is also the chairman of Arunachal Voluntary Blood Donors Organization, has conducted hundreds of blood donation camps throughout the state.

He is presently carrying out the drive at the Rama Krishna Mission hospital in Itanagar and has managed to collect 1,346 units of blood including its components since March 24 this year.

“Despite the huge demand for blood, it is getting quite difficult for us to find the donors. Also as the blood bank at the Tomo Riba Institute of Health and Medical Sciences (TRIHMS) is presently closed due to Covid-19 and the only blood bank catering to the patients of the region is the RK Mission hospital,” he said.

Jeke disclosed that six people have already lost their lives since March this year due to the lack of blood in the blood banks.

“Out of these six who died, one was suffering from chronic kidney disease while another was an aplastic anaemia patient,” he said.

“A premature baby was also among the ones to die due to blood scarcity,” he added.

There are six hospitals in the ICR, but only TRIHMS and RK Mission hospital have blood banks. Arunachal in total has 14 blood banks.

“Without blood, it would be difficult for the doctors to treat patients and the only way we can collect blood is through voluntary donations. Though people are coming forward, the demand at present is quite large,” Jeke said while appealing all healthy people to come and help save lives.

“The blood bank stock in RK Mission is almost nil and the patients have to rely on the voluntary donors. We managed to collect 19 units on Sunday out of which 16 have already been transfused,” he said.

Kobyum Zirdo, who has been helping Jeke gather volunteers through social media, said, “Although there has been an increase in the number of volunteers in the past few days, many refuse to come out due to the fear of Covid-19.”

“Since the ICR is under lockdown, the hospital (RK Mission) is less crowded. Also, the entire premises of the hospital are sanitized properly every day. Moreover, if you are careful and follow the SOPs, there shouldn’t be any problem,” Zirdo said.

“Travel passes would be given to those who wish to donate and one can WhatsApp us their details on 9632388114,” she said.

Chokni Miji, one of the blood donors said, “I have rarely come out of my house since the Covid-19 pandemic outbreak. However, I came to know through a friend that one of the patients here is in dire need of B+ blood and I couldn’t hold myself back.”

Miji said he made sure that he kept himself safe during the donation process by following the basics such as wearing a mask at all times and maintaining distance from others who were at the blood bank and hospital.