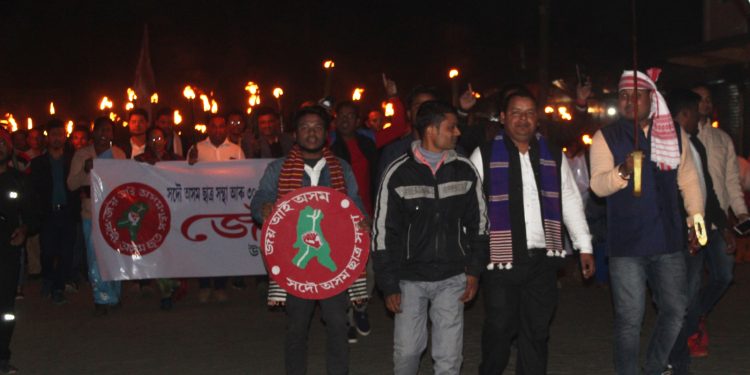 A day before union minister Amit Shah getting ready to introduce the Citizenship Amendment Bill (CAB) in Lok Sabha, the movement against the bill was intensified across Assam.

The Lakhimpur district unit of the All Assam Students’ Union (AASU) led a massive torch-bearing protest march against the bill in North Lakhimpur on Sunday evening demanding to scrap of the bill.

The protestors also pledged to fight against the bill till death.

The protest march was joined by thirty other organizations, senior citizens and the general public.

A protest meeting was held near the A-Team field of North Lakhimpur Govt. HS School on Sunday evening in which the speakers called for scrapping of the CAB terming it as a threat to the very fabric of Assamese identity, language, and culture.

In Dhemaji, the district unit of the Krishak Mukti Sangram Samiti (KMSS) in association with various students’ unions and other local organizations took out a massive protest rally against Cab at Silapthar town on Sunday.

Several thousands of people including students’ union members and other organizations took out a procession on the Silapathar town road and shouted slogans in protest against the CAB.

Besides KMSS, the AASU, Asom Jatiyatabadi Yuva Chatra Parishad (AJYCP) and other organizations have intensified the movement against the bill in Dhemaji district in the last few days.

The Dhemaji district units of KMSS, AASU, and AJYCP along with locals took out a mass rally, torchlight procession and organized meetings at different parts of the district.

AASU’s chief adviser Samujwal Kumar Bhattacharya and KMSS chief Akhil Gogoi have appealed to the indigenous people to stand united during the crisis period of the Assamese people.

In Margherita, activists of AJYCP and Satra Mukti Sangram Samiti (SMSS) staged protest holding hengdang (sword). The protestors gheraoed the office of the Margherita MLA, Bhaskar Sarma, in protest against the CAB.

They also took out bike rally against the bill.

In Golaghat, when the 11th conference of the District Assembly Council of the AGP was going on, the AASU activists waved black flags at AGP president and agriculture minister Atul Bora on Sunday shouting slogans like “Atul Bora Murdabad’, ‘Atul Bora lei sei’, ‘Atul Bora Hai Hai’ and ‘Atul Bora go back’ for his pro-CAB stand.

In the evening on Sunday at Nagaon, chief minister Sonowal was also waved black flags by AASU activists when he was going to attend a programme.