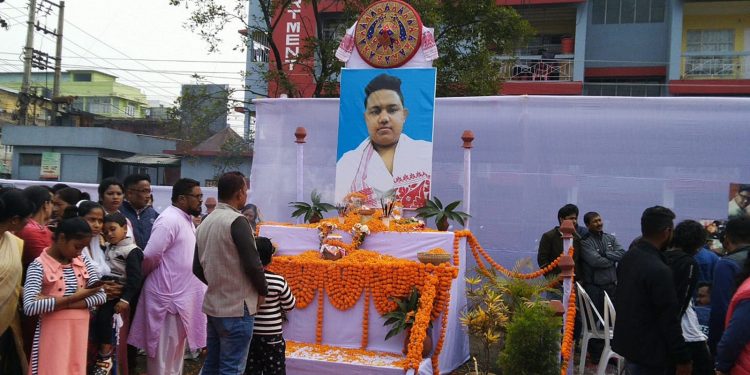 Tribute being paid to Sam Stafford in Guwahati. (File image)

The Assam Christian Forum has sought a public inquiry into the death of 17-year-old Sam Stafford, who died in police firing on December 12, during the anti-CAA protests in Guwahati.

Sam Stafford, a class IX student, was killed in police firing at Hatigaon area around 7 am, when he was returning from a anti-CAA protest rally at city’s Latasil field.

“We have seen the post-mortem report and now we are verifying the contents. We are meeting the Nagarik Samaj on Thursday and will push for a public inquiry to unearth the truth. We will submit the report to the AHRC and government agencies because we feel somewhere down the line there is an attempt to hush up everything,” Assam Christian Forum spokesperson Allen Brooks told Telegraph.

The family members of Sam alleged the post-mortem report proves that the security forces had intentionally killed the minor boy.

They have filed a complaint with the Hatigaon Police Station, seeking justice.

The post-mortem report stated that Sam’s death occurred due to shock and haemorrhage as a result of injuries sustained over the body.

It also stated that most of the injuries were antemortem and caused by rifled firearm.

“Two bullets penetrated my brother’s body. The bullet which pierced through his forehead proves that it was shot from a very close range. Moreover, we had seen multiple injuries all over his body, which proved that he had been brutality tortured before killing,” Mousumi said.

Sam, a student of Phaguna Rabha High School, was preparing for his matriculation examination and loved music and playing the tabla.