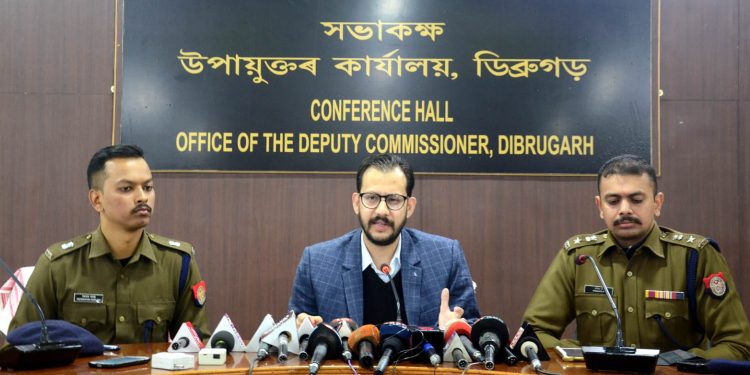 Forty-six cases have been registered and 27 people have been arrested so far by police for being involved in violent anti-Citizenship Amendment Act (CAA), 2019 protests in Dibrugarh.

This was informed by Dibrugarh superintendent of police Sreejith Thiraviam during a joint press conference at Dibrugarh on Tuesday.

While addressing the press conference, which was also attended by Dibrugarh deputy commissioner Pallav Gopal Jha, newly-joined district police Sreejith Thiraviam told media persons that the people have been arrested with sufficient evidence against them.

“Police are also verifying the CCTV and video footage received from various sources. Police have also identified the trouble-mongers from the video and CCTV footage. Actions will be taken soon against them based on the evidence. No one will be spared,” said the SP.

However, the law and order situation is now normal in Dibrugarh.

No incident of violence has been reported in the last 96 hours in any part of Dibrugarh district.

Curfew was relaxed from 6 am to 8 pm on Tuesday.

“More cases will be registered. Collection of evidence is going on and local people are helping us by coming forward for giving statements. The DGP has formed a special supervision task force. Action will be taken against the instigators and those involved in violence as per law,” said the SP.

He also said, “We will take strict action against those who are spreading fake news and rumours. All cases will be properly supervised. The special supervision task force, formed for the Northeast range, will have the additional SP (HQ) as a member.”

Deputy commissioner Pallav Gopal Jha said 43 government properties were damaged fully or partially during the anti-CAA protests in the district.

“We have identified the miscreants (protestors) and as per law, action will be taken. Damage assessment has been going on. Many government installations and private properties were damaged,” Jha said.

Jha also said those, who can provide CCTV footage of evidence of vandalism, would be awarded.

It may be mentioned that the anti-CAB (now CAA) protests turned violent in Dibrugarh district.

“We have taken steps to restore peace. Air and railway services are fully functional. Oil wells are functioning. The NEEPCO and BCPL depend on gas. Fuel including gas shortage will be restored in two to three days,” the DC added.

Meanwhile, the district administration has appealed to all to restrain from spreading rumours.

“We are also monitoring the price hike of essential commodities after the recent incidents and taking necessary actions,” said Jha.

He said night curfew will remain in Dibrugarh for some more time.

IPS officer of 2016 batch, Padnabh Baruah, who joined as the new additional SP (HQ), was also present at the press conference.

The inspector general of CRPF (operations) Jorhat sector, Sudhakar Upadhaya visited Dibrugarh on Monday amidst the prevailing situation in the wake of protests against the CAA.