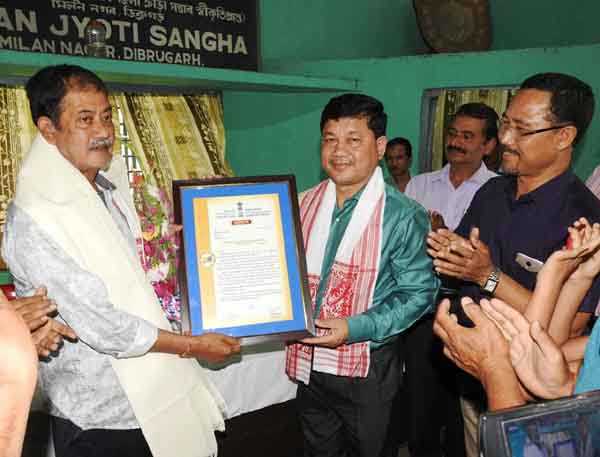 All India Radio Dibrugarh, during the yearlong celebration of its golden jubilee this year, is broadcasting programmes on a particular subject as the theme for each month starting from March last.

The theme on the basis of which the programmes are being devised in the month of May is “Family and Social Life”. In the present day where the society is being engulfed by materialistic thoughts, the Dibrugarh station of AIR is trying to highlight the virtues of Family and Social Life through various programmes devised in different formats in a scientific way for its listeners especially targeting the youths.

Besides holding some discussions in the studio with the experts the centre is trying to connect with the mass by interacting with cross section of the society at streets, public places etc.

According to a press release issued by the Head of Programmes (HOP) of the station Lohit Deka, apart from the government departments, especially the traffic department of the Dibrugarh district police administration and the transport department, people from all segments of the society are supporting and participating in those programmes.

“The extraordinary response from the society as a whole and the unprecedented participation of the listeners in the programmes being broadcast in connection with the Golden Jubilee celebration of the AIR station proves that in this age of media-proliferation the affection of the people towards radio is not getting faded away,” press release stated.

Coinciding with the theme of this month – “Family and Social Life” AIR Dibrugarh on Saturday felicitated eminent social worker and veteran organizer Amiya Hazarika for his life time contribution towards the welfare of the society.

Hazarika who is one of the founder members and the working president of the prestigious Milan Jyoti Sangha in Dibugarh was felicitated in a dignified function held at the conference hall of Milan Jyoti Sangha by Debendra Nath Basumatari, Adviser, AIR & DD for North Eastern Region, Dr. Upen Bora, Chief Adviser, Milanjyoti Sangha and Rajesh Arjun Belder, the Head of Office of AIR Dibrugarh with a citation, Gamocha, Shawl and a flower bouquet on behalf of AIR Dibrugarh.

Accepting the felicitation Hazarika praised AIR Dibrugarh for its contribution towards all round development of the society. He also thanked all the members of Milanjyoti Sangha for their support in rendering his services and promised to carry on his services for the welfare of society throughout his life.

Participating as the chief guest in the felicitation programme Debendra Nath Basumatari praised AIR Dibrugarh for its unique programmes devised in connection with the yearlong celebration of Golden Jubilee.

Amiya Hazarika is a name of repute in the field of socio-cultural and sports activities in Upper Assam. Born at Teok, Jorhat in the year 1951, Hazarika is involved with Milan Jyoti Sangha since its inception in the year 1962. Keeping himself far away from the limelight, he has been working relentlessly for upliftment of the society especially the youth and promotion of peace, organizing various sports and related activities through the Milan Jyoti Sangha.

From the last decade of the past century he has been instrumental in promoting the Book Fair Movement in Upper Assam and the Milan Jyoti Sangha was one of the pioneer NGOs. He was the Deputy Chairman of the Dibrugarh Municipality Board, was a member of Consultative Committee of North East Frontier Railway and a member of Programme Advisory Committee of AIR Dibrugarh.