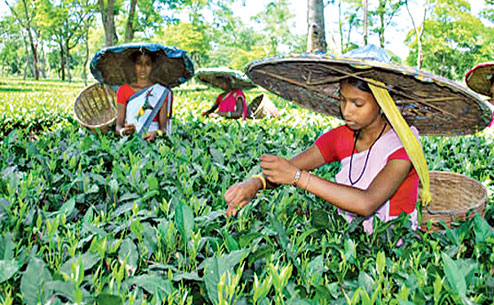 Women pluck tea leaf in a tea estate in Assam. Image for representational purpose only.

The Assam Chah Mazdoor Sangha (ACMS) has called for shutdown of all tea estates in Assam on January 8 as part of the nationwide general strike on January 8.

The central trade unions have called for general strike across the country on January 8 in protest against the Citizenship (Amendment) Act (CAA) and other issues.

The trade union has already geared up for the strike with circulation of posters and leaflets.

“In support of various other demands, we will also be staging the protest. Barring Bharatiya Mazdoor Sangha of the RSS, all trade unions will be participating in the general strike. The protest will be organised peacefully but in a massive scale. All tea gardens will remain closed on that day,” Ghatowar said.

Assam state secretary of the All India Trade Union Congress Ranjan Chowdhury said at least 10 Central trade unions, including Indian National Trade Union Congress and their affiliated bodies will go for the general strike countrywide against the anti-workers policies of the government on January 8.