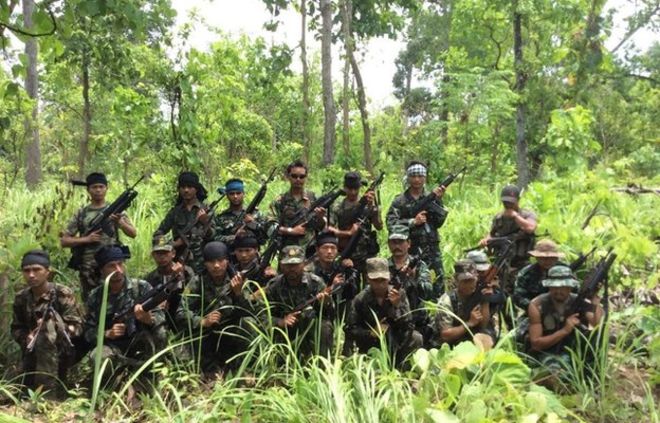 A group of ULFA (I) rebels in an undisclosed location. ( Image for representational purpose only).

Paresh Baruah-led proscribed militant outfit ULFA-I have reportedly killed three of its rebels in Myanmar for allegedly planning to escape from its bases in the neighboring country and surrender before security forces.

The three ULFA (I) cadres–Lalit Asom, Ashwini Asom and Rhino Asom alias Rubul Moran–were killed for trying to flee from one of the outfit’s camps at Taga in Myanmar.

Mridul was nabbed by a joint team of Army and police in Arunachal Pradesh on Wednesday.

“The incident took place 20 days ago when three ULFA (I) cadres were killed inside Myanmar by their own commander. The trio were escaping from the Taga areas of Sagaing region in the neighbouring country following an attack of the Myanmarese Army,” News 18 quoted an unnamed intelligence official as saying.

“The militants were trying to cross the international border to surrender before the security forces. But they were captured in the Niliguri Gut camp area inside Myanmar (opposite Tirap district of Arunachal Prradesh) by Golap Sonowal alias Golab Asom, who is the ULFA (I)’s commander of the Niliguri Gut camp,” the official added.

He said that after being found guilty in the court of the rebel outfit, the trio were given capital punishment following approval of the ULFA (I)’ chief Paresh Baruah.