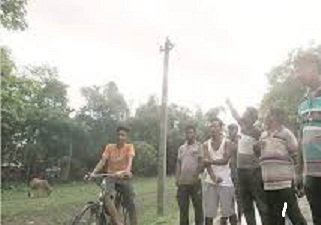 Residents of Choto Pokalagi Village are yet to get power supply facilities though 72 years of Independence have passed. Photo Credit - indianexpress.com

August 15 was like any other normal day in Assam’s Choto Pokalagi Village, close to the West Bengal border. There were no Independence Day celebrations. Like most days, residents of the village woke up and made a beeline to the neighbouring villages to charge their cellphones. Choto Pokalagi has not had electricity since Independence. Due to its position on the border, villagers say its electrification will require the West Bengal and Assam Governments to work in tandem. Now that the BJP-ruled Assam and the Trinamool Congress-ruled West Bengal are feuding over National Register of Citizens (NRC), residents of the village say they are losing hope.

A report published in the The Indian Express states that the village, which is under Dhubri district, is surrounded by Bengal villages. West Bengal says Assam is unwilling to allow the villagers to take electricity from it. Assam, meanwhile, blames West Bengal for not allowing wires to pass through its land and reach the village. After the final draft NRC left out 40 lakh residents in Assam, a row had erupted. Chief Minister Mamata Banerjee had already raised her voice against NRC, alleging Bengali-speaking people have been kept out of the list. A TMC delegation of MPs and MLAs was recently detained at Silchar Airport and allegedly heckled by Assam Police.

The report further stated that the villagers of Choto Pokalagi say they have been caught in the middle of this fight. “Five years back, each villager contributed money from Rs 500 to Rs 1,000. Electric poles were put up in the village and houses got meters. That was the closest we got to electricity supply. A few months back, we once again approached the local MLA. We asked him for a no-objection certificate so that we can approach the Bengal Government for electricity… But now, with Bengal and Assam fighting over NRC, our dreams of getting electricity is gone,” said Sukdeb Das, a Panchayat member and a BJP leader.

Pushpita Roy (Dakua), Sabhadhipati of Cooch Behar Zilla Parishad, said that the Bengal Government was ready to supply electricity to the village. “We tried our best. When Manish Gupta was Power Minister, he too tried. We are ready to electrify the village through our lines. But Assam did not allow us to set up connections to this village. It is really pathetic there. Students cannot study properly. They are conducting NRC drive in the village but cannot get electricity for it,” said Roy.

“It is because the Bengal administration failed to give proper papers that a large number of people in my area could not include their names in NRC. TMC is creating a ruckus over this,” he added. The village, just besides Bakshirhat Railway Station, has 132 families and a population of 510, with most engaged in agriculture.

“After 72 years of Independence, our children study in kerosene lamps after dark. They cannot study for more than a few hours. During the summer, the heat is unbearable, especially for children and aged people. Only two to three homes have solar-powered lamps, the rest depend on kerosene lamps,” said 38-year-old Surja Lal Sarkar, who lives with his wife and two children and owns five bighas of agricultural land.

When the Assam Government carried out an NRC drive in the village, barring 66 individuals, the others had their names on the latest draft. “If they can conduct an NRC drive, why not give us electricity, which is a basic requirement?” asked Suraj Lal. “I have a battery in my shop to run a small bulb. Every couple of days, I am forced to carry the battery to Joraimore market (in West Bengal) to charge it and bring it back,” said Noor Islam, a villager who runs a cloth shop.

Children of the village are enrolled in schools on the Bengal side and must cover 5-7 km on an average to get to schools in Bakshirhat or Toofangunj. The Assam Government had opened a health
sub-centre in the village a year ago, but could not inaugurate it due to lack of electricity. Villagers travel 9 km to Halakura in Assam or 8 km to Toofangunj in Bengal to avail hospital facilities.

Villagers, however, said they avail all central Government schemes such as Swacch Bharat Mission and National Rural Employment Guarantee Scheme (NREGS). “Since childhood, I have never seen electricity here. I don’t know if I will see it in my lifetime. We blame the Governments and the political leaders for this. May be this is because we are a handful of people living here. Everywhere around us in Bengal villages, there is electricity. I feel ashamed to visit them to watch television,” said
65-year-old Abdul Mannan Mian, who owns four bighas of agricultural land. His three sons work as agricultural labourers. “We have to buy diesel at a high price to run a handful of irrigation pumps for our fields,” said 60-year-old Ramzan Ali Mian.