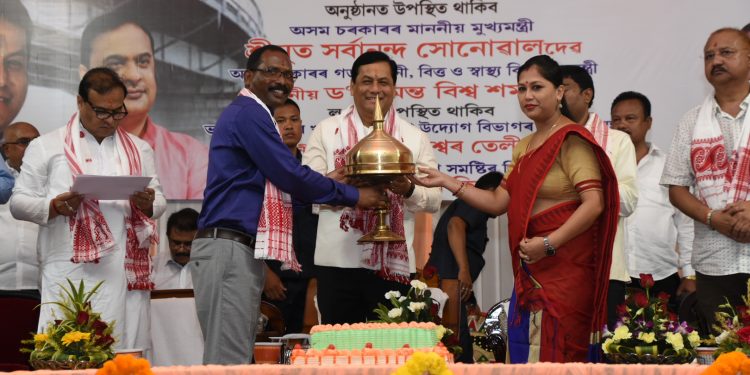 Assam chief minister Sarbananda Sonowal on Tuesday said Tinsukia is a historic city which is known as a commercial hub and the city has always made contributions towards the economic progress of the country.

He said this on the occasion of laying the foundation stone of railway over-bridge on LNB Road (Sripuria Road) at Tinsukia.

“Both the state and the central governments have taken steps to develop Tinsukia as a modern city and as part of these initiatives, the foundation stone of the railway over-bridge is being laid here today,” Sonowal said.

Notably, the 563.40 meter long over bridge would be built with 50:50 State and Central Government financial sharing for a total cost of Rs 60.21 crore.

Saying that the whole country was celebrating the birthday of Prime Minister Narendra Modi as he had been able to inspire the people of India to work dedicatedly for nation building, Sonowal asserted that Prime Minister Modi was able to re-establish India as a force to reckon with at the world stage.

He also called on the people of Tinsukia to pledge to make the city clean and green and also to strengthen the age old harmony and unity among the different ethnic groups of the society.

Asserting that Act East Policy could provide tremendous impetus for the growth of North East region, Sonowal highlighted Tinsukia’s reputation as a commercial hub and he urged the people of Tinsukia to take advantage of Act East Policy to capture the 80 million people strong market of 13 BBN and South East Asian countries.

Speaking on the occasion, PWD minister Himanta Biswa Sarma said that it was a long standing demand of the people of Tinsukia for the railway over bridge and as a result, the project was started over LNB Road railway crossing jointly by State and Central Governments.

He also informed that out of the total 26 railway over-bridges, to be constructed in Assam as both state and central government’s joint initiative, the works of the bridges at Jorhat, Nalbari, Farkating and Barpeta had already been started by Assam Government with its own funds while Lanka, Chirang, Rangapara and Tinsukia bridges would be built with 50:50 share.

The minister also highlighted the schemes of Assam Government like Apon Ghar for subsidized housing loans, education loan like Abhinandan, Mudra scheme for young entrepreneurs for setting up MSME etc in his speech.