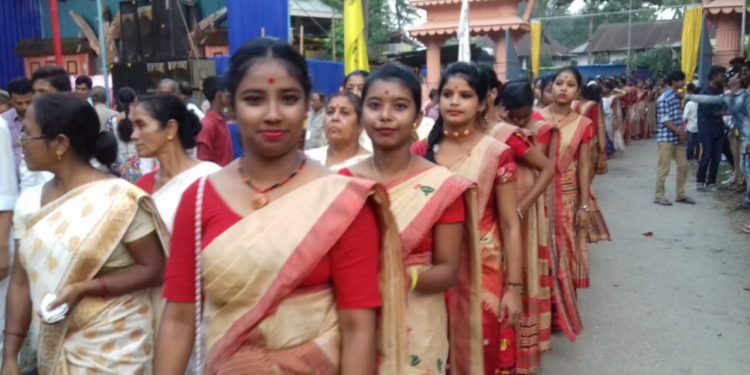 A view of the cultural procession taken out as part of Raas festival in Mangaldai on November 22, 2018. Photo: Northeast Now

A large number of visitors thronged the Sri Krishna Raas festival organized by Mangaldai Sanatan Dharma Sabha at the Mangaldai Bishnu temple of Darrang district in Assam on Thursday evening.

Addressing the gathering assembled on the occasion, eminent actress Goswami observed that the present generation has not been taking up work culture seriously.

“So it is high time that we all pledge to work hard from a platform like the Raas festival which a symbol of communal harmony and universal brotherhood. We should create an environment where we can eliminate laziness and reluctance to work culture from our mind and help our young generation get motivated for work through skillful knowledge,” she said.

Earlier she was brought to the Sanatan Dharma Sabha from Mangaldai Circuit House in a traditional manner escorted by a colourful cultural procession where mainly women and school students took part.

The inaugural function moderated by Dhirendra Kr Sarma, one of the secretaries of the celebration committee was also attended by several prominent persons including Mangaldai legislator Gurujyoti Das, retired Professor of Gauhati University Dr Umesh Deka and office bearers of the organizing committee and the Sanatan Dharma Sabha management committee among others.

Attractive stalls have been set up at the festival to showcase more than two hundred idols of different divine characters of Indian mythology besides large number of stalls of commercial establishments.