We don’t want the change that has occurred in Dhubri, Barpeta, Goalpara, Hojai, Jamunamukh 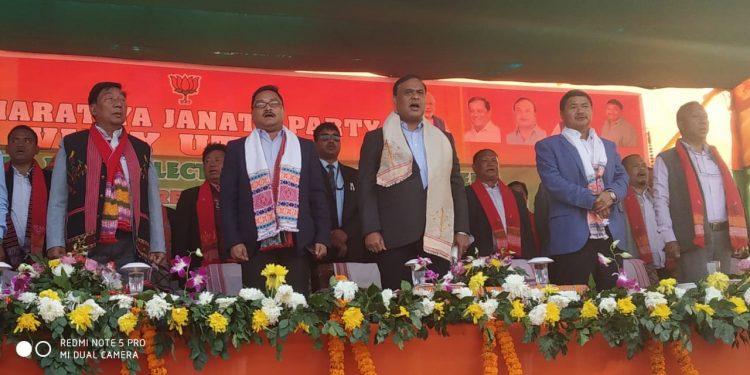 Addressing the Vijay Utsav held at Karbi Anglong Sports Association (KASA) Stadium at Chutianala here the minister said the protest against the Bill was mere misinformation campaign and propaganda.

He asked, “Have the people who are agitating against the Citizenship (Amendment) Bill even read it? Do they know anything what is in it? They did not read it. They have just carried out propaganda that there will be a deluge of foreigners. Are people crazy that they will just get up and come to settle here? They said 1.5 crore foreigners will come. Is there even enough trucks and buses for bringing in 1.5 crore people.”

“Changed has occurred in Goalpara, the Assamese people have to flee from there too. We don’t want the change that has happened in Hojai and Jamunamukh where our mothers cannot even walk on the streets. We don’t want that to happen in Karbi Anglong.”

Criticising the opposition and the critics of CAB, he said, “Nowadays, there is a new phenomena. Whenever I give a speech some people behave like freshly caught fishes and vigorously try to wriggle about. They keep jumping about in TV shows and say “why has he said that, how can he say that?”

“You have tried to give away Assam to someone. But we want that Assam should remain in our hands forever. Let it remain in the hands of the Karbis, the Dimasa, Bodo, Rabha, Sonowal, Missing, Kalita and Sarma. We are trying to secure Assam for the indigenous people.

He also said that development would be carried out with a vast improvement in road communication, particularly in West Karbi Anglong.

He said nobody expected that the BJP would come to power one day. “PM Narendra Modi will have to be brought back as he commands the love and respect of the people.  Diphu Lok Sabha seat will be won convincingly by 2 lakh votes in the next election,.”

Chief Executive Member (CEM), Karbi Anglong Autonomous Council (KAAC), Tuliram Ronghang speaking at the Vijay Utsav said that it was the BJP government that had given funds for development.

He said, “During the last 15-year rule of Congress party, there was no special package worth a single paisa. Immediately after the BJP government coming to power, Dr. Himanta Biswa Sarma took us to Delhi to have a discussion with PM Narendra Modi on grievances of Karbi Anglong, on UPDS’s MoS. After that PM Narendra Modi sanctioned fund of Rs. 94.11 crore.”