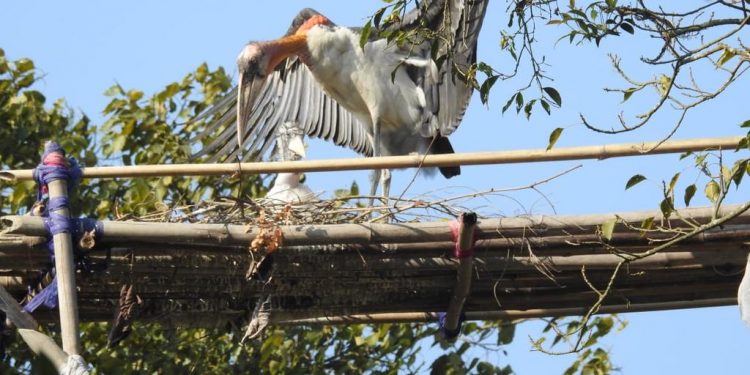 The Greater Adjutant Stork, locally known as Hargila in Assam, has bred for the first time in an assisted breeding platform in the State and the baby bird has now become a fledgling.

This wonderful result has been due to the efforts of a group of people known as ‘Hargila Army’ who have been instrumental in conservation of this endangered species of bird.

The founder of ‘Hargila Army’ is Purnima Devi Barman, a wildlife biologist and conservationist . She is also associated with Aaranyak, a leading wildlife NGO based in Guwahati.

The members of the ‘Hargila Army’ mostly comprises the inhabitants of Dadara and Pachariya village in Kamrup district of Assam.

Purnima has been honoured with prestigious awards like Whitley Award, also known as Green Oscars, and RBS Earth Hero Award 2016 for her efforts in conserving the Greater Adjutant Stork.

The bird that has also been listed as endangered in the International Union for Conservation of Nature and Natural Resources (IUCN) Red List of Threatened Species.

According to the IUCN, the total population of Greater Adjutant Stork is estimated to be from 1,200 to 1,800 in total.

The IUCN which is world’s oldest and largest global environmental network, further says that around 800 birds are found in Assam.

The Greater Adjutant Stork , which is a member of the stork family Ciconiidae, has an average length of 136 cm and has a massive wedge-shaped bill, a bare head and a distinctive neck pouch, is sometimes hunted for their use in folk medicine.

Purnima who once visited the Dadara and Pachariya villages for her research work in 2008, was moved to see the plight of the bird species.

She formed the ‘Hargila Army’ in the year 2015 comprising of some women from the villages of Kamrup district.

At present, the villages of Dadara and Pachariya are on a mission for efficient conservation of the species of Greater Adjutant Stork.