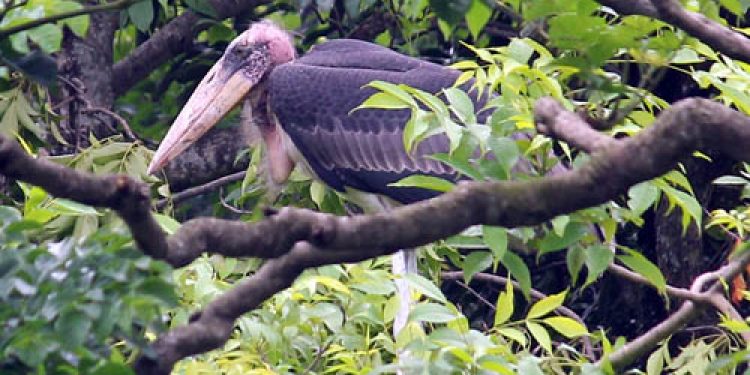 An Adjutant Stroke is sitting on a tree in Japorigog Hills, Guwahati on 12-06-18. Photo: UB Photos.

The Dadara Durga puja in Kamrup district will spread awareness on conservation of the greater adjutant stork this year.

The organizing committee is installing two giant bamboo statues of the greater adjutant stork in front of the mandap.

Besides, the committee has also organized various competitions, like mehendi drawing, on the theme of the greater adjutant.

Around 80 per cent of the world’s total greater adjutant population, locally called haargila, is found in Assam.

Noted environmentalist Purnima Devi Barman, who has won several awards, for her work in spreading awareness on the importance of the greater adjutant to the environment, has based most of her work in the three villages of Dadara, Pachariya and Hingimari villages.

The greater adjutant is marked as endangered on the IUCN (International Union forConservation of Nature and Natural Resources) Red List of Threatened Species. Barman is an associate of the Sarbajanin Durga Puja organizing committee this year, reporst TOI.

The two giant statues of the bird in front of the mandap are to draw attention of visitors. The women of the village are preparing a play on the theme of the greater adjutant to be staged during the Puja.

The Hargila Army, a unit which was formed with the women of Dadara around three years ago to work towards the conservation of the endangered species, now has more than 200 members.