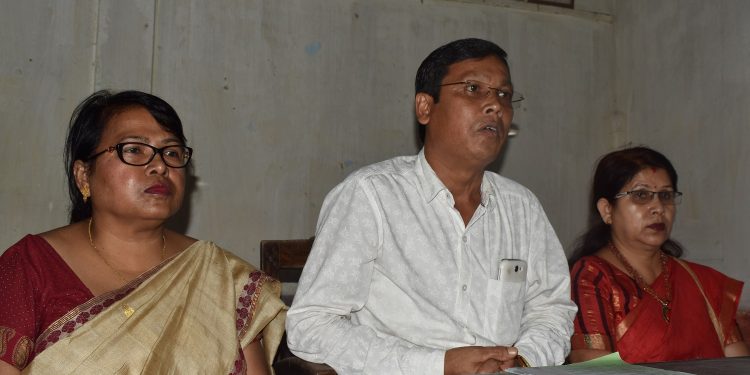 Former BJP loyalist Baliram Boro who had recently joined the Indian National Congress (INC) came down heavily on his former party in Tangla of Udalguri in Assam on Monday.

Addressing a press meet on Monday at Congress Bhawan in Tangla, Boro lambasted the saffron party and alleged that the party has always adopted anti-tribal and ant-indigenous stand.

Baliram Boro, who contested last Assembly polls on a BJP ticket from Dudhnoi seat of Goalpara district in Assam has joined the Indian National Congress (INC) at Rajiv Bhawan in Mangaldai on April 13 last.

A resident of Dighali under Dhupdhara police station in Goalpara district, Boro had earlier claimed to have been associated with the BJP since 1990 holding important portfolios like vice-president of ST Morcha, Assam Pradesh BJP from 2012 to 2017 besides acting as BJP’s prabhari (in-charge) in Bongaigaon and Kokrajhar for two years.

Boro who claims that the adamant stand of BJP of passing the contentious CAB has made him join the Congress under the able leadership of veteran politician, Bhubaneswar Kalita who vehemently opposed the bill in Rajya Sabha and is contesting from Mangaldoi HPC on a Congress ticket.

Boro said that Kalita is a strong leader who has stood with the people of Assam in the hour of crisis and such leader can only take the voice of the indigenous people to New Delhi.

Boro making a scatting attack on the saffron party said in every tribal autonomous councils be it Tiwa, Dima-Hasao, Deuri or Rabha Autonomous Council, the BJP has saffronized the leaders of the councils and made them join BJP or lure them to support BJP to make them their lap-dogs and snatch the political, cultural rights of the tribal populace living in the councils.

Former chief executive member (CEM) of Tiwa Autonomous Council, Rama Kanta Deuri who is the present MLA of Morigaon is such an example, he said.

Even Tankeswar Rabha, the chief executive member (CEM) of Rabha Autonomous Council was offered a BJP ticket which he denied and re-offered to one of his trusted aide.

Boro also made a shocking claim that BJP is in nexus with Independent candidate of Kokrajhar HPC, Naba Sarania alias Hira and is secretly supporting him instead of BJP-BPF-AGP alliance candidate Promila Rani Brahma.

Replying to a question that why did he join Congress at this hour when BJP is in power both at State and Centre he said, “I have joined Congress to save the tribals by making door to door campaigns against the detrimental stands of BJP against tribals and save them from the tyrannical rule of BJP”.