Celebrities from different fields show concern for the flood ravaged people of Assam and affected wildlife in national parks, sanctuaries

In a noble initiative, a group of concerned youths has started a campaign in the social media to create awareness about the Assam flood.

The initiative is spearheaded by Pronoy Boruah and Manas Pratim Sarma. Pronoy, an alumunus of Girijananda Insititute of Management and Technology (GIMT) is presently the managing director of Xpec Innovations Pvt Ltd and the IT convener of Nagaland BJP.

Manas Pratim Sarma works as the news editor in the All India Radio (AIR).

They have started the campaign under the tag ‘Pray for Assam’ to create awareness about sorry state of affairs of lakhs of people in the State affected by the recent spate of severe flood.

They have also created awareness about the plight of the wildlife at the flooded national parks and sanctuaries, especially the famed Kaziranga National Park.

Every day they make it a point to tweet to celebrities including international stars seeking support for the flood affected people of Assam.

Talking to Northeast Now, Pronoy said that the Assam floods get negligible coverage in the national media.

“Through our campaign we are trying to create digital awareness among those who can offer some kind of help and support to the flood ravaged people,” said Pronoy.

He further added that they have been getting tremendous response from celebrities who have expressed their solidarity with the people of the State who are totally devastated in this year’s flood.

They have also shared the link of the chief minster’s relief fund in their tweets.

Several celebrities from the entertainment industry and the field of sports have expressed their concern for the flood affected people. 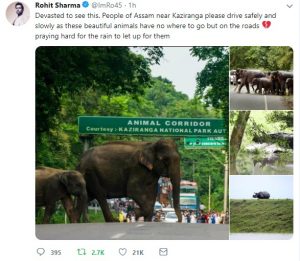 Ina heartwarming message in his Facebook page, Pronoy thanked Akshay for his act.

‘We are grateful to Akshay Kumar for this kind gesture for not only tweeting about it but also donating Rs one crore each in CM’s relief fund and Kaziranga.

His tweet will inspire millions who can also help the people of Assam.

God bless you and your loved ones.’

Expressing concern for the displaced animals of Kaziranga National Park (KNP), star cricketer Rohit Sharma has made an appeal to all those driving along National Highway 37 to be extra careful while passing the KNP.

On Thursday, these youths have also tweeted to Sunny Leone, who is known for her charitable works.

They believe this endeavour will go a long way in not only creating awareness about the Assam floods on a much wider platform but also generate some contributions to help those in need.