Assam Floods: The Annual ‘Tandava’ of the Brahmaputra (Part-III) 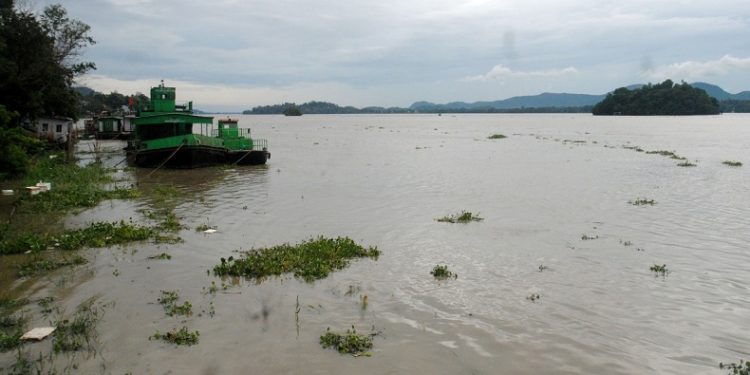 Floods are a natural phenomenon in Brahmaputra valley from time immemorial. It is a cycle of creation, preservation, and destruction that occurs unfailingly in the valley every monsoon. However, its intensity varies from year to year. This article is the 1st of the four articles on floods in the Brahmaputra and its tributaries, its causes, methods of mitigation, actions taken so far by government, etc.

The Problem: The Flood Prone Area map of Brahmaputra valley in Assam prepared by the National Remote Sensing Centre (NRSC) shows that a very large part of the valley is vulnerable to the menace (source: www.isro.gov.in/updated-flood-hazard-atlas-assam). The average damage data in the valley due to floods from 1953 to2012 is shown below along with the NRSC map: 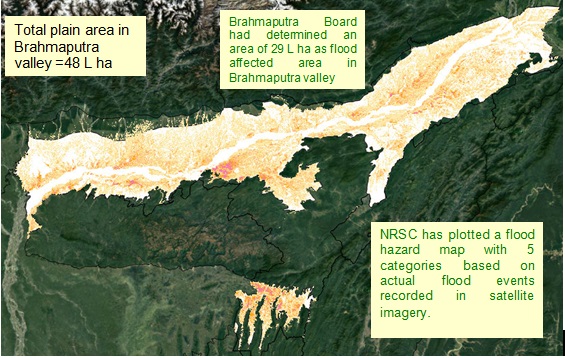 Although the fury of the floods has always been a burning issue, yet, many benefits that also emanate as a result of these very floods cannot be overlooked.  Flooding increases the fertility of soil as it leaves behind fertile sediments. In fact, the paddy cultivation which is the principal crop in Brahmaputra valley is carried out without adding manure or fertilizer in most areas- the fields being made fertile by the annual flooding. There are bio-diversity hotspots such as Kaziranga National Park, Orang National Park, Pabitora Wildlife Sanctuary, Dibru Saikhowa National Park and many other wetlands and forests along the Brahmaputra which would lose their sustainability without the annual deluge that enriches them. As flood results in a spread of water for an extended time over a large area, it ensures recharge of underground aquifers which in turn reduces demand for manmade canals to carry water across long distances for irrigation. It also facilitates increased fish population in the rivers and other water bodies of the valley.

The gains accrued from floods notwithstanding, it has to be accepted that large floods in the Brahmaputra or its tributaries in Assam cause devastation with immense miseries to both man and wildlife and also in many cases, irreparable damages to the environment.  Therefore, there is a need to moderate floods which will create a conducive atmosphere for infrastructure development followed by socio-economic upliftment in the valley.

Causes of floods in the Brahmaputra basin:

a. Physiographic conditions: The 640 km long Brahmaputra valley is very narrow and confined between hills on the east, north, and south. The average width of the valley between the foothills in north-south direction is only about 80-90 km of which the river itself occupies about 10 km on an average.  Forest covers a few km of the valley width – mostly along the higher foothill region. Tea gardens in many districts of the valley occupy available prime high land. Only the remaining area of the valley is inhabited and cultivation is done largely in low lying fields. Therefore, a large part of inhabited and cultivated areas are vulnerable to floods. This adverse topographical feature is responsible for large damages in the valley by floods. The map below depicts the physiographic condition of the valley.

b. Meteorological situation: The Northeast region under the Brahmaputra basin receives very high annual rainfall ranging from 248 cm to 635cm, concentrated largely during 5 rainy months from May to September and to a lesser extent, in the 3 pre-monsoon months. The intensity of rainfall is also quite high. Rainfall of more than 40mm in an hour is frequent while rainfall of 70 mm per hour is common. A very high rainfall of the order of 500mm per day has also been recorded at several locations. Overall, meteorological conditions favour heavy flooding in the valley. Figure below depicts the annual rainfall of the basin falling in India. 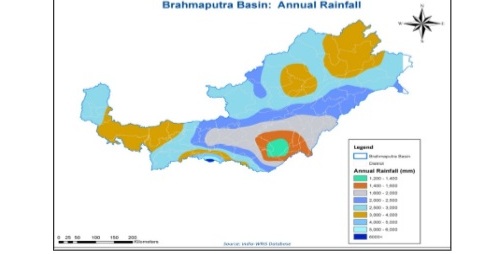 C. Topographic condition: The narrow valley of Assam with an area of 48000 sq km is surrounded by 465000 sq km of hills and mountains. The main stem of Brahmaputra and most tributaries joining it in the valley have a high gradient in these hills. Due to this, within a short period after a heavy rainfall, huge quantities of water are brought down to the valley by the main stem and these tributaries. But due to the flat gradient of Brahmaputra and their tributaries in the valley, this water entering the valley cannot be carried forward immediately. To accommodate itself, the excess water swells and spreads out overflowing riverbanks and causing floods.

d. Earthquake and landslides: The NE region is highly seismic and geologically unstable.  While smaller earthquakes are a regular feature, a number of major earthquakes have been recorded in recent times.  The debris and loose earth from the landslides as a result of these earthquakes are carried down by the hill streams and deposited in the river beds of the valley making it shallow. This results in a reduction in the carrying capacity of the rivers including the Brahmaputra causing floods and erosion in the valley.

e. Encroachment of floodplains: In 1940-41, the population density of Brahmaputra valley was quite low ranging from 9 to 29 person/sq km in different districts of Assam. As per the present trend, population density is 200 people/sq km in the plain areas of Assam. This has led to increased pressure on the limited land of the valley and the encroachment of floodplains. Therefore, more people are suffering and damages have increased from floods.

f. Embankment breaches: Undoubtedly, embankments have provided reasonable protection against floods since their construction. However, many of the embankments are more than four decades old. Poor maintenance and subsequent higher levels of floods, mainly attributable to a rise in river bed levels, lead to breaches of these embankments causing floods and inundation in protected areas.

Dhruba Jyoti Borgohain is a retired chief engineer of the Brahmaputra Board. He can be reached at: [email protected]