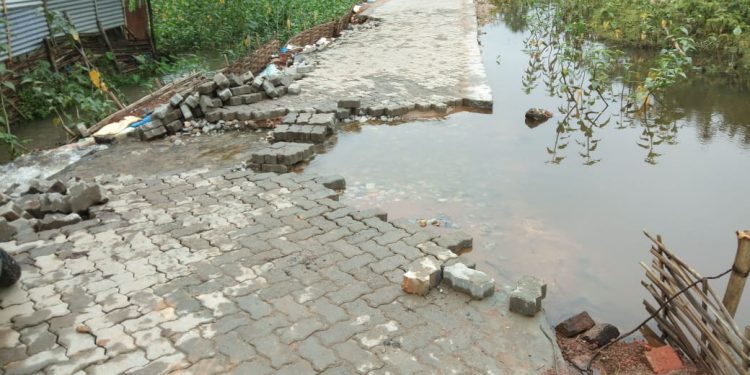 The road which passes through the ward number 16, from Agia road to D N Sinha Stadium Road, faced tremendous pressure near the Goalpara Public School point as heavy shower throughout the day inundated the area.

Also read: Assam: New road washed away due to lack of proper drainage in Goalpara

As a result on Friday evening, a huge portion of the road was washed away.

Meanwhile, a section of local people alleged that the road was washed away only because of the poor construction and as the work was not done as per PWD estimate.

“The road was done with political interference by the close aides of the MLA of East Goalpara. Thus the estimate was compromised,” alleged a local resident preferring anonymity.

On the other hand, a PWD department source said, “the road lacks water outlet and a culvert is most necessary. However, a section of land owners prevented the department from constructing the culvert. As a result of this, the area was inundated and the portion of the road washed away.”

Taking cognizance of the matter on Saturday, Banti Talukdar, circle officer of Balijana revenue circle on behalf of the deputy commissioner visited the spot and took stock of the road condition and the area as well.

The last one week’s incessant rain has also overflowed the Habri River of Krishnai and submerged large scale agricultural areas of the Sutarpara and Garomari villages under Matia agriculture sector.

The flash flood damaged Eri variety of paddy crops which were about to be harvested. On Saturday, several country boat owner farmers were seen harvesting the underwater crops.