Two persons have been arrested by Dhubri police on charges of being involved in cattle smuggling cases.

The two cattle smugglers, who were arrested by police, have been identified as Jakir Hussain Bepari and Hamidur Rahman.

Both of the cattle smugglers are from Barundanga under Tamarhat Police Station.

During investigation it was found that Bepari and Rahman have been involved in issuing false and backdated challans in the name of ‘Barundanga Go Hut’ to cattle smugglers and illegal cattle transporters. 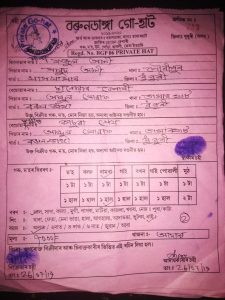 The police team, which unearthed the nexus between cattle smugglers and persons responsible for issuing challans, was led by Trinayan  Bhuyan, deputy superintendent of police (HQ), Dhubri and officer-in-charge of Gauripur Police Station.

Earlier, on Sunday, in a similar drive, three cattle smugglers were arrested by police.