Assam: Dhubri ‘Ghost House’ to be razed down 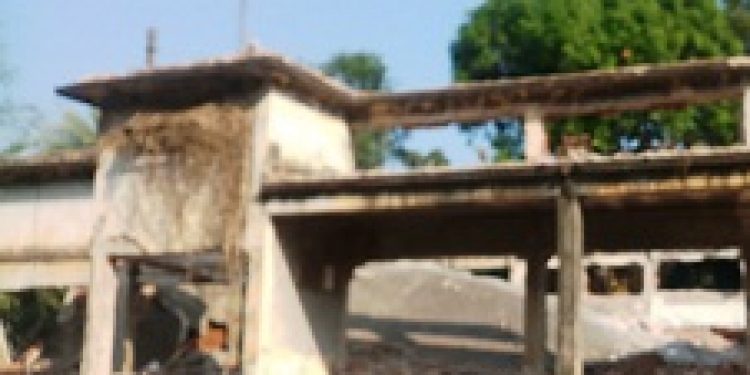 The 'haunted house' of Dhubri will soon be a thing of the past. Photo Credit - Northeast Now

The infamous building of Dhubri town, popularly known as Bhoot Bungalow (Ghost House) which was once the official residence of the then District and Sessions Judge of undivided Goalpara district of Assam Upendra Nath Rajkhowa – will soon become a thing of the past.

In place of this infamous building will come up the new Judicial Court Building of Dhubri district. Justice Upendra Nath Rajkhowa murdered and buried his wife and three daughters in the year 1970 in the said site. On November 3 last, the then Chief Justice of Gauhati High Court Ajit Singh laid down the foundation stone of the proposed new Judicial Court Building of Dhubri district.

In his inaugural speech, Justice Ajit Singh said, “Since the time of its inception (1880), Dhubri court is functioning in the Deputy Commissioner’s (DC) office building. Once the new building is constructed, it is hoped that the functioning of the court will be smoother as the judiciary will have their own individual building.”

The new building which will be G+5 with an estimated cost of Rs 43 crore would have in total 20 courtrooms with designated rooms for the Dhubri Bar Association along with pharmacy, dispensary, library, etc. Tornel Regon, Site In-charge of TNT Project Limited, the construction company entrusted with the task of constructing the judicial building, told Northeast Now, “The demolition work of the aforesaid bungalow has been started which will be fully demolished to build a  six-storied court building with state-of-the-art facilities.”

It may be recalled that Rajkhowa, the then District and Sessions Judge of old Goalpara district, committed the heinous crime of murdering his wife and three daughters in the said bungalow, which is popularly known as Bhoot (Ghost) Bungalow among the local people of Dhubri district and has remained abandoned since the ghastly murder episode.

Rajkhowa, who joined as the District and Sessions Judge in 1969, was residing in the infamous building along with his wife Putuli and his three daughters – Nirmali, Jonali and Rupali. Rajkhowa was later hanged to death in 1974.