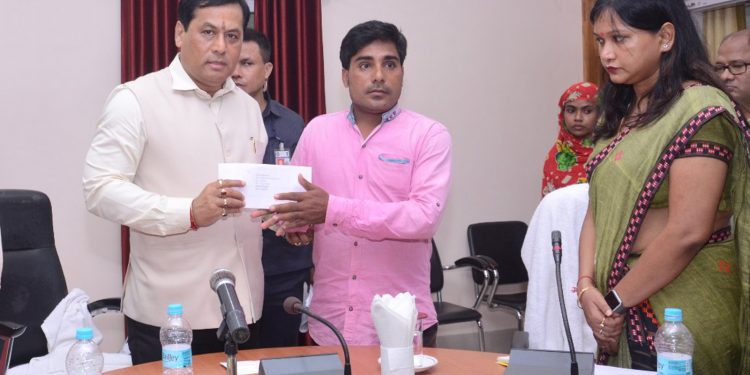 Assam chief minister Sarbananda Sonowal handing over an ex-gratia cheque to the next of kin of a flood victim in Goalpara on Tuesday. Image credit - Northeast Now

The CM first inspected different flood affected areas under Dudhnoi constituency including a washed away PWD road from Dighali Part III to Jogirbori near Dhupdhara.

Padmananda Choudhury, executive engineer, apprised the chief minister of the rural roads damaged in the district.

Later, Sonowal visited the relief camps set up by the district administration at Chandaria Pathar ME School, Madrassa High School and Joytun Nesa High School of the town.

He assured of providing money for repairing the schools and houses damaged by floods.

He also said seeds would be provided for agricultural lands.

The inmates expressed their satisfaction before the chief minister over the relief camp management by the district administration.

Before leaving to Dispur, Sonowal also held a meeting with the departmental heads of the district at the DC’s conference hall and took stock of the situation.

In the meeting, he handed over an ex-gratia of Rs 4 lakh to the next of kin of two victims, who died after drowning in flood waters.

The CM also instructed the water resources department to check the present condition of the river embankments.

The inland water department was instructed to check the engine boats and not to allow plying without licence.

In the same meeting, about Rs 1.50 lakh, collected from the government employees of the district, was donated to the chief minister’s relief fund.